Believe It Or Not, The NHL Season is Upon Us 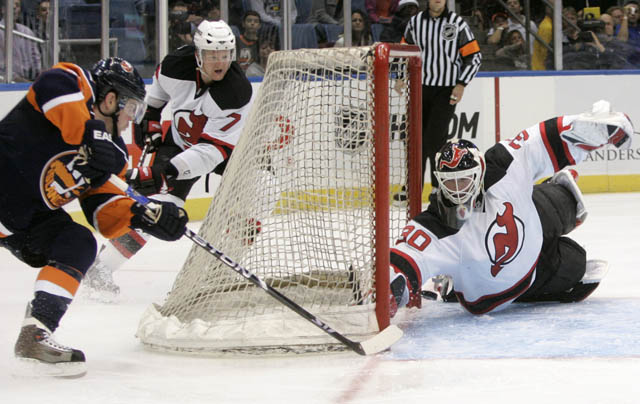 Photo of Martin Brodeur of the Devils stopping a shot by the slanders' Mike Comrie in a pre-season game by AP Photo/Frank Franklin II; Photo below of Henrik Lundqvist throwing a t-shirt by AP Photo/Petr David Josek 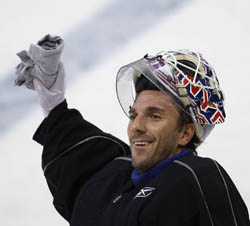 The NHL season starts a little earlier than usual for our local teams. The Rangers are opening their season in Prague this weekend with two sold-out games against the Tampa Bay Lightning. The Islanders and Devils open up against each other next week. For all three teams, the expectations are very different.

The Devils enter the season with a great top line and one of the greatest goalies ever in Martin Brodeur between the pipes. Beyond that there are plenty of questions. Bobby Holik is back which is a nice story, but he isn’t the player he was when he left. Brian Rolston should have a happier homecoming on that top line and New Jersey should be good enough to get into the playoffs, but probably not much more.

The bad news on Long Island is that the Islanders are rebuilding again. The good news is that they are getting better. New coach, Scott Gordon, has installed a new system, which will take some time for the players to learn, but things seem to be headed in the right direction. Keep an eye on Kyle Okposo he could be a superstar very soon.

After reaching the second round of the playoffs two-consecutive years the Rangers decided to rebuild their roster. Jaromir Jagr is gone, leaving the NHL for Russia, Shanahan is gone (for now) and so are a number of other players. In their places are some interesting pieces. Markus Naslund should be a good addition and Nikolai Zherdev has potential, but Wade Redden’s play in the preseason is worrisome. Redden has a big contract to live up to and if he continues his erratic play, he will draw the ire of the blue seats quickly. Most importantly, Henrik Lundqvist is back, which provides stability in the back. Expect the playoffs and a deep run is possible if the pieces all gel together.