If Jersey City is considered "the sixth borough" now, just think of what will happen if the dream of a footbridge that connects to lower Manhattan is actually realized.

It's good to have dreams, and Jersey City resident Kevin Shane does. Tired of the laborious and oft-unreliable process of commuting to NYC by train, Shane took it upon himself to conceptualize the Liberty Bridge, which would carry pedestrians and cyclists over the Hudson River from JC to Battery Park City without ever once having to think the word "PATH." 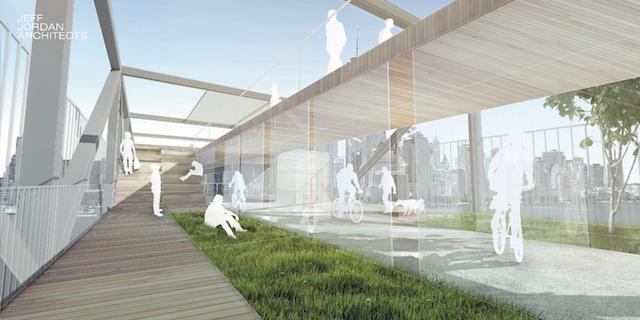 The project led him to Jersey City architect Jeff Jordan, and together they created a series of renderings imagining a world where New Yorkers and New Jerseyans could lounge together in the bridge's tall native grasses, where Tinder profiles bearing the word "Hoboken" wouldn't be promptly dispensed of with a dismissive left swipe.

His vision is nothing short of beautiful:

The Bridge would cater to commuters with an express walking lane and separate bike lane (both partially enclosed from the elements). It would bring a park-like experience to those who want to make the Liberty Bridge a destination that will offer a 200+ foot view over the Hudson unlike any before. The Bridge will be the home to coffee shops and other retail, artwork, grassy areas and benches.

It will start on the Embankment in Jersey City and gradually increase in height (with access points closer to the River) and end at a higher level in NYC. The Bridge will offer elevators, stairs and ramps for access on and off and be fully ADA compliant. Most importantly, the Bridge will add a new, environmentally friendly and pleasurable way to commute into NYC for the thousands of NJ residents that currently drive and take mass transit into the city everyday. 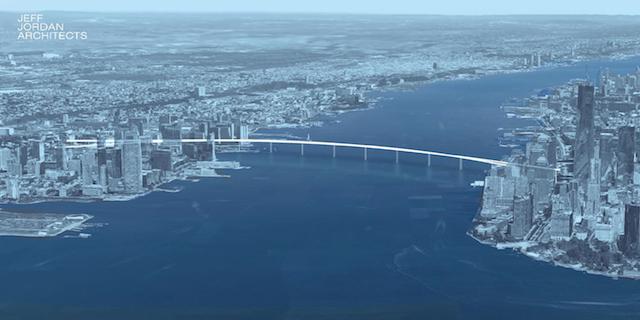 It may be a pipe dream, but you can help. Sign a petition to Governors Cuomo and Christie, and engage with the project on social media. (We're not even to the Kickstarter phase yet.)

With your support, maybe, just maybe, Jersey City can one day become as prohibitively expensive as NYC.

#battery park city
#dreams
#jersey city
#liberty bridge
Do you know the scoop? Comment below or Send us a Tip