Behind The Scenes Of Lindsay's Milkaholic Ad

Turns out Esquire magazine has some inside intel regarding the making of that E-Trade commercial Lindsay Lohan is so upset about. They happened to be getting a behind-the-scenes look at the company's advertising firm, Grey Group, during the time the team was creating the ad.

To recap, Lohan is suing the company for $100MM, claiming they used her first name for the "milkaholic" baby as a parody of her life as a party girl. Turns out that having a thirst for milk wasn't the first idea on the table, however; early descriptions included rug burn, jailbait, tramp, slee-otch, and flank-steak woman. And the original script from last August doesn't shows the name "Deborah," which was later crossed out and replaced with "Lindsay."

While Esquire was embedded at the company in December, the reporter on hand asked Grey's chief creative officer, Tor Myrhen, if they chose "Lindsay" as a reference to Ms. Lohan. He reportedly said, "Not at all. I don't think we even thought of it... Every aspect of that commercial was discussed in endless meetings with E-Trade. But we decided to keep it."

Lohan's lawyer maintains, "this commercial was conceived using Lindsay Lohan as a character without her knowledge or permission for the profit of the company." As for mommy Dina Lohan, who Lindsay went crying to after first seeing the ad, she commented on Esquire's notes saying: "We think it's obvious. [The notes are] horrific. This just proves our point. Oh my goodness, I can't even read this, it's so disgusting." Some of these original notes can be read below... do you think Lindsay will get her $100MM? 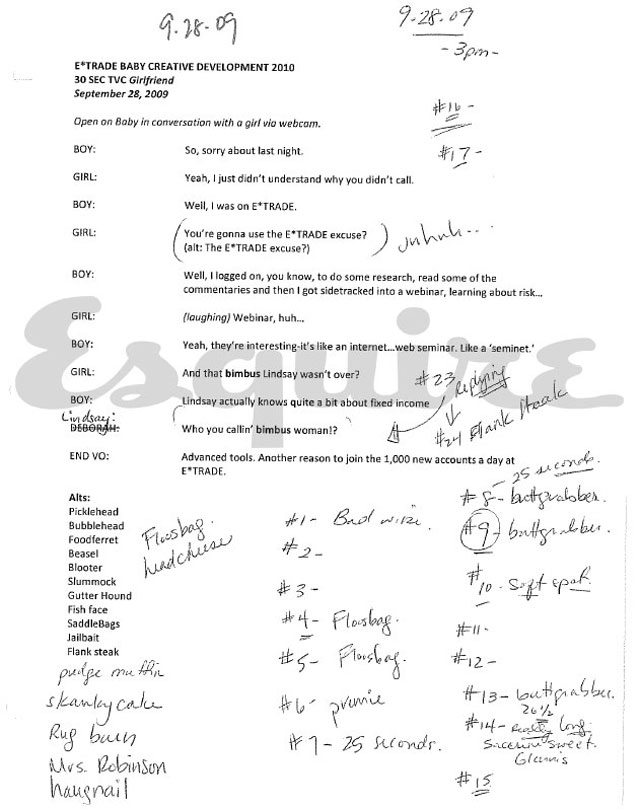