It was less than a half hour after the polls closed Tuesday night that the celebration kicked off at Cafe Omar in the Flatbush section of Brooklyn—specifically in a neighborhood local Assemblywoman Rodneyse Bichotte called “Little Haiti.” As chair of Jumaane Williams's Public Advocate campaign, she served as emcee for the evening's speakers—a steady stream of union officials, community activists and elected leaders from across the city.

They gathered in the same spot where Williams was the night he lost the Lieutenant Governor's race last year. Many of the same supporters were there. But on Tuesday, the Hookah lounge and bar filled with revelers who danced, ate fishcakes and plantains and wanted to see and be seen with the city’s ascendent activist turned Public Advocate.

Bill Lipton was one of those people in the room last fall and Tuesday night. As New York State Director of the Working Families Party, he said this victory was proof that there was a winning strategy in playing the political long-game. The WFP endorsed Williams in both races.

“He actually set the stage for another victory,” Lipton told WNYC/Gothamist.

While Williams entered the race as the odds-on favorite because his was the only name ever to appear on a citywide ballot, the crowded field with 16 other candidates made for an unwieldy and unpredictable race.

The field was largely comprised of other Democrats with party labels invented for the special election. One possibility was for those candidates to effectively split each other’s vote, creating an opening for the one elected Republican on the ballot, City Councilman Eric Ulrich of Queens. While Williams consolidated enough support citywide to overcome that, that is what in effect happened down the ballot—giving Ulrich a second place showing.

There was also no model to predict turnout. This was the first citywide special election since the City Charter was changed in 1988. Prognosticators predicted low numbers and they were right. Just over 400,000 registered voters turned out at the polls on Tuesday—making turnout just over 8 percent of active registered voters.

Of those who did go to the polls, more than a third of them voted for Williams. He won decisively in Brooklyn, where his Council district is located, and in Manhattan, where he was boosted by the endorsement of the widely well-regarded borough president Gale Brewer.

Even when Williams lost a borough, he didn’t lose it by much. Ulrich took Queens and Staten Island and Assemblyman Michael Blake won the Bronx, but their victories were narrower. Former City Council Speaker Melissa Mark-Viverito won her former Council district, which spans parts of Manhattan and the Bronx, as well a few assembly districts in Queens. But she was was unable to win enough votes to take a full borough.

“The special election was mainly a competition among local elected officials, and the vote results reflect their local bases of support turning out,” Steve Romalewski, Director of the CUNY Mapping Service at the Center for Urban Research at The Graduate Center / CUNY said. 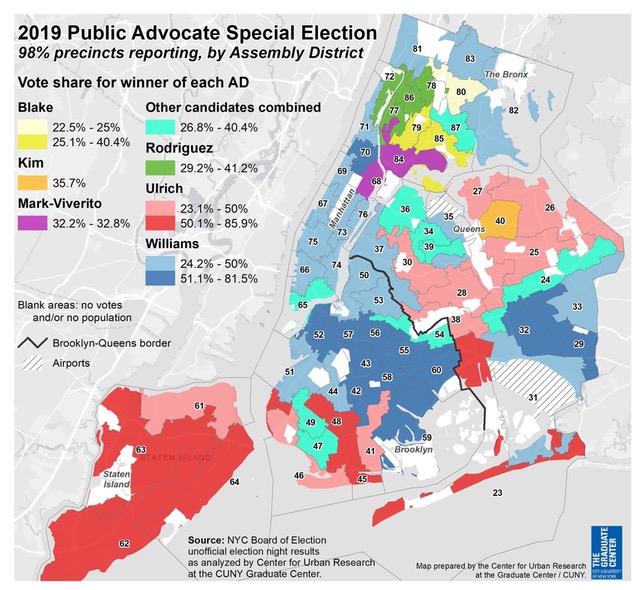 “Despite the overall low turnout, Williams had enough support not just from local voters but beyond, especially across Brooklyn and Manhattan, to secure a big win,” Romalewski added.

“He earned this,” said Mark Green, the city’s first Public Advocate and an early Williams supporter. He credited Williams's “relentless hard-work” with scoring The New York Times endorsement and cast doubt on whether any Democrat would seek to challenge him in a primary in June or general election in November—a process that kicked off on Tuesday, the same day as the special election.

Now Williams needs to start doing the job, Green said, by finding talent to help him run the office.

“Not just club members, although they are not excluded, not just anybody because of identity politics,” Green said, “he will succeed if he gets people around him, like him: independent, smart, creative, no B.S. and willing to stand up to anybody including and especially, the mayor.”

Supporters expect that Williams will approach the job with the same activist spirit he brought to his days in the Council—whether it was advocating from police reform or affordable housing.

“The nice thing here is his voice, the way he uses it, that’s what people are going to expect to hear from his office and that’s what he needs to to do,” said City Councilman Brad Lander, one of Williams's earliest and most ardent allies, “just start doing the job.”

#elections
#jumaane williams
#public advocate
#original
Do you know the scoop? Comment below or Send us a Tip