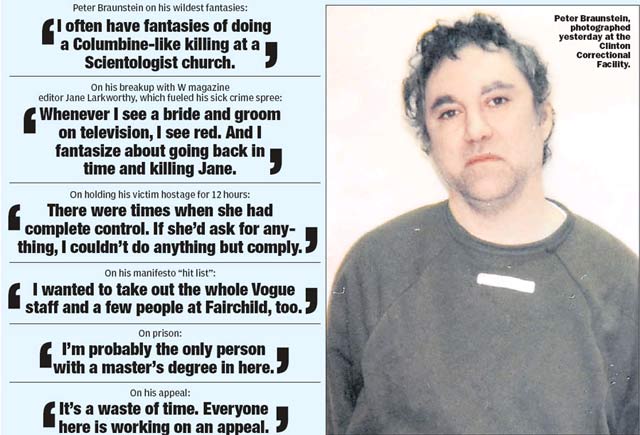 Peter Braunstein really loves the New York Post. The fashion industry reporter-turned-prison inmate, after being recently convicted of the kidnapping, sex assault, armed robbery and burglary of a former co-worker on Halloween in 2005, gives his first interview since being locked up this past summer to the tabloid.

He gives a number of choice quotes to the Post, who calls him "still-crazy." And how! Not only does he regret not killing his ex-girlfriend Jane Larkworthy ("I fantasize about going back in time and killing Jane" plus the knowledge that she's married now makes him "see red" whenever I see a bride and groom on television"), he also said that planning the attack on his colleague (a "substitute victim" for the violence he wanted to inflict on Larkworthy herself) "saved" him: "It gave me a reason to wake up every morning. Funny enough, I finally stopped using drugs and drinking alcohol because I was so excited and caught up in the planning."

But these days, at a maximum security prison upstate, Braunstin has been thinking about who else he'd like to kill:

At the top of his death list is New York magazine writer Vanessa Grigoriadis, who penned "The Fire Fiend and the Fashion Girls" while Braunstein was on the lam in December 2005.

"I planned on coming back into the city in broad daylight - do it right, you know? - and blow her head off and throw the magazine on her corpse," he said nonchalantly. "I still think about doing that."

His ultimate plan was to "commit the firefighter crime in New York, commit a possible second crime, see America, then return to New York, liquidate it, and then die."

He also has a vile hatred of Scientologists, whom he describes as mindless cult members.

"I often have fantasies of doing a Columbine-like killing at a Scientologist church," he said.

Well, there goes the appeal! Actually, Braunstein doesn't believe in appeals: He says, "It's a waste of time. Everyone here is working on an appeal."

Braunstein feels bad about the victim he chose, and said he never wanted to rape her. He also remarked how he loved her wardrobe and thought, "I wish I could have met her when I was normal. I think we could have been friends." We doubt the feeling is mutual - the victim's testimony was riveting and disturbing for the way Braunstein ruined her trust in the police and fire department since he gained access to her apartment by posing as a firefighter.

Braunstein is on a number of medications. He said of his 18-year sentence, "There's a million ways to end your life here. I want to die, so I'll find a way...Im subject to mood swings; I may feel differently tomorrow." And why he gave the interview to the Post, we don't know, but we do know that Braunstein does have a history with the paper - he planted an item in Page Six about his then-girlfriend Larkworthy (who would later testify against him during the trial) supposedly attacking him and placing him at Bellevue in 2004.

Here's Gothamist's past coverage of Peter Braunstein. And one possible way Braunstein is much like you and me: He watches a lot of Law & Order, only he does it from his jail cell.