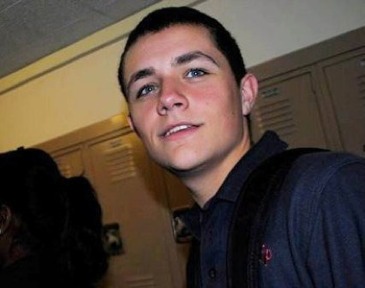 Hundreds gathered in Queens to mourn the 16-year-old boy who was killed in a freak accident on Friday night. Daniel Fernandez, a NJ resident who attended St. Francis Prep in Queens, had stuck his head out of the emergency hatch on a double-decker party bus and was struck in the head by the underside of an I-95 overpass, on the NJ side near the George Washington Bridge. The party bus had been heading to a catering hall for a friend's Sweet 16, and apparently the underaged crowd was getting ready to party.

The Post reports that numerous Tweets from those on the bus—including Fernandez—were discussing alcohol. There was a mention of getting "sauced" at the party as well as:

Hours before, Fernandez, 16, about to begin his junior year at St. Francis Prep in Fresh Meadows, asked a pal over Twitter: “Are they checking on the bus??”

“Yeah be careful brooooski,” she warned back to Fernandez, whose handle was DanMotherf--ker.

Friends posted pictures of party girls in blue dresses. One kid bragged, “The amount of bottles on this limo is rediculous.”

The party bus, operated by Designer Limousine which touts the vehicle's upstairs and downstairs bars, VIP section and nightclub-like lighting, had a driver and a security person. The security person insisted that he repeatedly told the teens not to open the hatch, but it was opened when he went downstairs to tell the driver it was getting too hot upstairs.

The Daily News has an graphic showing the height of the bus—13 feet—and the clearance of the overpass.

Designer Limousines is also investigating the fatal incident and issued a statement, “We express our deepest heartfelt sympathy for the family of this tragic incident. Our company cares about the well-being of our patrons. Our vehicles are kept to the highest standards. For over 30 years, our drivers and staff are provided with specialized training in transportation safety."

Another owner of a party bus operator, Kevin Truitt of Tru Limousine , told the Bergen Record that three or four steps are needed to open the hatch, which is federally required for emergencies (for instance, if the bus overturns). Truitt didn't think this kind of incident could be avoided even with supervision, "I don’t think it’s an issue of it being a party bus. An accident can happen in a car. I’m sure no one on the bus thought that kid would be dead by the end of the night... He and everyone else were probably just having a little fun.”