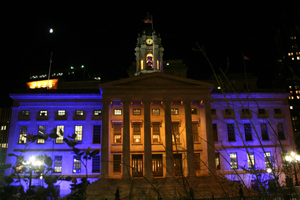 Councilman Charles Barron stood on the steps of Brooklyn's Borough Hall yesterday and announced that he would be running to become the first African-Amercian Borough President in Brooklyn's history. The Daily News reports that Barron wasted no time in denigrating the current Beep Marty Markowitz. "We've had a cheerleader. Now we need a real leader in Brooklyn." Barron was referring to Markowitz's seemingly perpetual sunny disposition and love of public appearances while looking faintly ridiculous.

If Markowitz has a diametrical opposite, it would probably be Barron, whose political style tends towards the angry and confrontational. He led several protestors earlier this year in an effort to get parks and streets named after confrontational black activist Sonnie Carson. His chief of staff was later barred from City Hall and then fired for making a death threat against Councilman Leroy Comrie.

Barron promised that if elected he would tackle issues important to his constituents, like affordable housing, police misconduct, health development, and race relations. Markowitz is not up for re-election because of term limits. If Barron were to win the election, he would take office in 2010.