Bedbug Sniffing Dogs on the Prowl for Pests 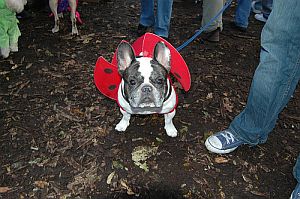 Release the hounds. The latest innovation in bedbug eradication is being brought to you by Advanced K9 Detectives, a company using man’s best friend to sniff out the bloodsucking pests plaguing New York City. Since 2004, complaints about bedbugs to the Department of Housing have soared to 6,889 (up from 537 a year) and 2,008 building owners issued summonses (compared to 82 in ’04).

Carl Massicott, the owner of the six-dog team, says he’s been inundated with calls from some of the city’s top hotels. His hounds are trained with the same techniques as drug and bomb-sniffing dogs: when they find the tiny bugs, they get a treat. The company favors smaller dogs who can negotiate small New York apartments and seek out the bugs in their tiny hiding spaces. Massicott tells the Daily News: “A dog's nose is cutting-edge technology. Our animals are 100% honest, and trained to work for food and love instead of profits.”

The bedbug epidemic is nationwide, and although Advanced K9 is the first company in New York to offer dog sniffing, researchers at the University of Florida have been working to train dogs to find bedbugs and termites for over a year. Since it doesn’t look like the scourge will be eradicated anytime soon, it makes sense there is a documentary about bed bugs in the works – and the filmmaker is looking for testimonials.