It looks like these sinister bedbugs won't rest until every tween in America is deprived of access to tarted-up, pseudo-Californian ensembles. After bedbugs forced the closure of the Hollister flagship store in SoHo on Wednesday, the pestilence has spread to the South Street Seaport, where Abercrombie & Fitch, which owns Hollister, has been forced to close its doors. Where will teenage tourists from the suburbs shop to look like teenagers from the suburbs now?!

According to an Abercrombie & Fitch spokesperson, the store was closed to "deal with a similar problem" as Hollister's, i.e. the parasite that dare not speak its name. But don't worry, kids, the company has turned to Mayor Bloomberg for guidance. In a letter to Bloomberg, Abercrombie CEO Michael S. Jeffries asked for “leadership and guidance” on how best to address the problem, the Wall Street Journal reports. We're not trying to upstage the mayor, but it's pretty simple; they just need to wash all their clothes in extremely hot water (120°F minimum). And move.

"We caught it very early in the stages of detection," an anonymous source at Abercrombie & Fitch tells the Daily News. "We are investigating whether this was a selling-floor issue or a back-room issue. We are continuing testing." The company promises that the Hollister location will open Saturday at 10 a.m., but the damage has already been done! Brooklyn teen Stanley Carlton showed up at Hollister yesterday with his mom, only to find it closed. His mother was pissed, because she bought him some T-shirts there recently. "You made me waste my money," she told her son. "We are going to Old Navy." Nooooooooo, Mom! That's even worse than bedbugs!

Below, a photo taken outside the Hollister store by tipster Adam Bazadona, who writes, "Ever since Hollister's bedbug infestation, their quality of models has really taken a turn for the worse": 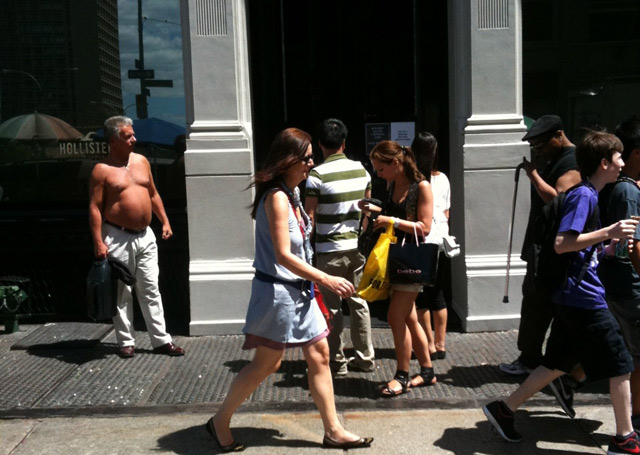 #abercrombie & fitch
#bedbugs
#hollister
#soho
#south street seaport
Do you know the scoop? Comment below or Send us a Tip