A Bed-Stuy woman says an NYPD officer fatally shot her dog on Sunday night as she walked him off-leash in a neighborhood park. Laura Stephen, a 53-year-old fashion executive, told Gothamist on Monday that the officer opened fire on her dog Ziggy, a six-year-old pitbull mix, from a distance of about twelve feet. She is denying the NYPD's account that the dog lunged at the officer, making him fear for his life.

Stephen said that she remembers Ziggy sniffing around some picnic tables near the corner of Macon Street and Saratoga Avenue shortly after 7:00 p.m. when two police officers approached. "I called the dog, knowing they wanted me to leash him," she said. "And when I called him he came trotting out—trotting. He's a slow mover." 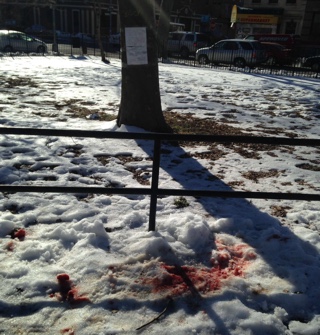 Blood on the scene Monday morning (via Tipster).

According to Stephen, one of the officers reacted quickly. "[Ziggy] turned toward them—they were still twelve feet off," she said. "Right in front of me, the man pulled his gun out and shot him twice... he was bleeding so I started to try to stop the bleeding with the snow."

Dozens of police officers arrived on the scene shortly after the shooting, according to multiple witnesses who approached the park, noticing the commotion. Police cordoned off the area and established a crime scene. Neighbors said they were troubled by an apparent lack of urgency, as Ziggy bled on the sidewalk for about 45 minutes (according to Stephen, the dog died later that night, after police transported him to an emergency veterinary facility).

"They were just standing around, chitchatting, making jokes," said 27-year-old neighbor Aaron Dunn, referring to the police. "They were just letting it bleed out. It had two gunshots in it. The owner was patting it with Kleenex."

Stephen said that a bystander lent her a cellphone, and that she called her teenage son, Aidan, who rushed to the park from Williamsburg. He arrived with friend, and quickly rushed home to get his mother's wallet and cellphone. On his way back, he cut across the crime scene area. Multiple witnesses said they observed several police officers approach Aidan, push him against a tree, and arrest him. "The son is running through the park eastward, is obviously distraught, and the cops just grab him and throw him against a tree," Dunn said. "They put him in handcuffs."

"He was frantically saying he had to deliver the wallet to his mom, the cops would not let him pass and restrained him," said neighbor Michelle Bilella. 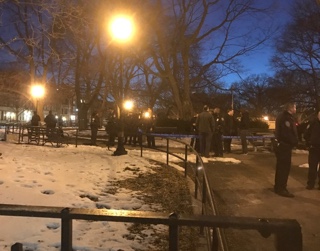 Police on the scene Sunday night (via Tipster).

An NYPD spokesman told Gothamist on Monday that two officers observed a dog without a leash in Saratoga Park, and approached to issue a summons. The dog then allegedly "lunged at the officer." The officer, in "fear for his life," then shot the dog twice. He ultimately sustained a cut on his left thumb, according to the NYPD, though the spokesman could not confirm how the cut was sustained. The entire incident is under internal investigation.

Stephen said her son was charged with disorderly conduct and released from the precinct; the NYPD did not have record of Aidan's arrest.

After Ziggy died, Stephen said a female officer patted her on the shoulder, said she was sorry, and handed her a summons for waking her dog without a leash. She "gave me a crumpled up piece of pink paper which was a criminal court appearance ticket," Stephen said, adding, "I mean, what is that? The dog's f**cking dead, okay?"

Stephen said she she fostered Ziggy, a stray, after finding him in Bushwick shortly before Hurricane Sandy. "He'd never run at anyone in his life," she said. Several neighbors testified to Ziggy's temperament on Monday. (Bilella described him as "lax, a bit lazy, non-aggressive.")

The shooting rattled neighborhood dog owners, who said they've recently formed a tight-knit group, and have bonded over what they consider aggressive ticketing. A Parks Department spokeswoman said dogs must be on-leash between 9:00 a.m. and 9:00 p.m., though the rules are sporadically enforced, according to neighbors. "We've been ticketed and harassed at an alarming rate in the last few months," said neighbor Maia Barnett. "Cop cars have even driven through the park pretty fast with their spotlight on to chase us out of the park." 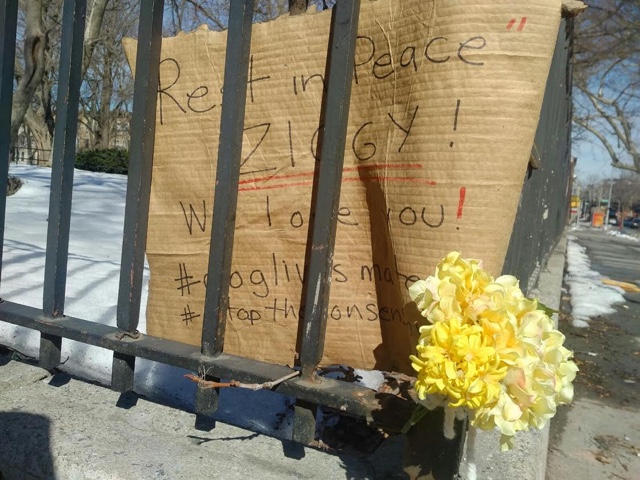 "They have this kind of intimidating presence, and it's gotten to the point, before this incident, where we text [each other] 'cops,' and flee the park like we're criminals," Dunn added.

Yelp reviews suggest the off-leash group isn't unanimously appreciated. "Be cautious," commenter A.F. wrote in 2014. "Sometimes people let their dogs off their leash to run in the field... Some dogs are cool, but some owners can be irresponsible / too trusting."

"This is so much bigger," Stephen told Gothamist. She noted that there is a playground in the park, and that it was still light out when the shots rang out. She is now researching for a possible lawsuit. "I could have been hit... here's a person carrying a gun that reacts to something that was so unwarranted and unthreatening."

"I have all of the respect in the world for people who fear dogs, because it's real," she added. "But if this individual had a fear of dogs, and he came in to speak to me about dogs, then what was his intention the whole time?"

Neighbors placed signs and flowers at the park's edge on Monday. "It's crazy that bullets were flying through the park at all," said Dunn.

#dog shot
#Saratoga Park
#Ziggy
#original
Do you know the scoop? Comment below or Send us a Tip