Long-time Brooklynites may be familiar with the siren noises that resound on Friday evenings in neighborhoods across the borough. This noise, which signals the beginning of Shabbat, gives observant Jews a heads up that it's time to head home before sundown. The sirens are especially common in neighborhoods like South Williamsburg and Borough Park, which have large ultra-Orthodox Jewish populations.

The sirens, while extremely loud, are short-lived and usually easy enough to ignore, but a new siren on top of a Bed-Stuy synagogue is causing a bit of a stir with residents. (Disclosure: I am one of these residents.) The siren was recently recorded hitting a decibel level of 106, more than double the legal limit for New York City.

"It leaves me with a ringing in my ears and headaches that have continued for two days," said Aaron Graubart, who lives at 144 Spencer Street, a six-story apartment building next door to the Bais Yokov Nchemyeh D'setmer synagogue at 690 Myrtle Avenue. "I work from home and I now have to be out of the apartment on Fridays in order to avoid the sound. The siren is literally forcing me out of my home on Friday afternoons."

Recording of the siren going off. Warning: it sounds like a very loud siren..

The siren first appeared after a recent expansion of Bais Yokov. The synagogue is three stories tall, which means the siren is going off just a stone's throw from the upper windows of 144 Spencer.

"I feel like it is a form of displacement," said Robert Prichard, another resident of the building. Prichard, who co-founded Radio Free Brooklyn, an Internet community radio station, said he relies on his hearing for his job, and is gravely concerned about the noise level. "It feels like we are being driven out of our homes."

This is not the first time the noise level of temple sirens has been an issue for Brooklynites. In 2004, a yeshiva in Midwood received five citations from the NYC Department of Environmental Protection after neighbors complained about the noise level. In the end, the siren's volume, which measured in at 127 decibels, was lowered.

Prichard and other residents at 144 Spencer Street have taken a similar approach to the siren at 690 Myrtle. The sound was actively discussed in a tenants' group and many made calls to 311.

"All the calls amounted to the same thing: I'd get an answer back that the police assessed the situation and felt no action was needed," Prichard said.

Frustrated by the lack of action, Prichard reached out to Community Board 3, which referred him to DEP. In August, the agency sent out two agents to take a reading outside the temple. They measured two blasts: the first reached 90 decibels and the second 93. For comparison, the legal limit for an air conditioning unit is 42 decibels, as measured from an open door or window of a nearby residence. (The decimal scale is logarithmic, so 90 decibels is around 100,000 times as loud as 42 decibels.) According to the National Institute on Deafness and Other Communication Disorders, repeated exposure to noises that exceed 85 decibels can result in hearing damage or loss.

The agents also took readings at other nearby apartments, including Graubart's, where the decibel level clocked in at over 100 with the windows open—89 with them closed. After evaluating the findings, Prichard said, the DEP said its agents would be return the following week to take additional readings. They told Prichard that they would also be warning the synagogue of their findings and letting the synagogue know about their scheduled return.

"Sure enough, the DEP comes on Friday and there is no alarm," Prichard said. "They knew they were coming to take the readings so they didn't set it off. The following week it goes off again."

The DEP said agents would return again the following week, but in the meantime Prichard decided to take some action on his own.

"I put on a yarmulke and a jacket and a white shirt and some nice black chinos and went downstairs and asked to speak to the rabbi at the synagogue," Prichard said.

He described the situation, explaining that the decibel levels were not only illegal but dangerous. Prichard said the sound was hurting his ears and asked that the volume be lowered.

"I was told that the decision had to come from the Grand Rabbi. I asked if I could make an appointment with him but no one would do it," Prichard said. "I asked the rabbi to tell the Grand Rabbi to give me a call and I left my card. I haven't heard anything." 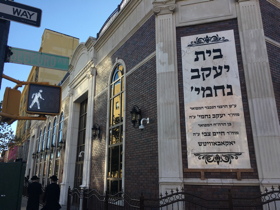 According to Prichard, the DEP returned and took further measurements from various apartments, eventually escalating the issue and setting a court hearing date of November 22nd.

When Gothamist contacted the DEP about Prichard's complaint, a representative confirmed that the agency had been in touch with the synagogue, but would not offer further comment on the situation or the complaint. No one at Bais Yokov Nchemyeh D'setmer synagogue was willing to comment on the opposition to the siren.

Prichard said that the agency encouraged residents to write letters for the hearing detailing the high level of the siren and the effects it has had on them, as well as their children or pets. Still, many remain skeptical about the outcome.

"I just think they will pay the fine and carry on as normal," Graubart said.

In the meantime, the residents at 144 Spencer are trying to make their voices heard. A meeting was held to discuss the issue and a petition started. Prichard and a few others are working on the final stages of an "All Ears Matter" sticker, which they plan to place around the neighborhood.

"It just feels like our rights to live our lives unmolested are being taken away," Prichard said. "It is infuriating to know that our health is negotiable."

Gabrielle Sierra is an arts and culture journalist born and raised in Brooklyn. She has written for a variety of publications, including Paste, Billboard, MySpace and The Daily News.