"I want to smoke it right now, but I can't get it," said 57-year-old Grant Manning on Wednesday afternoon, standing back from a swarm of reporters in front of Deli & Grocery at the corner of Broadway and Jefferson Street in Bed-Stuy. "Ain't no one getting nothing today."

A few feet from Manning, Brooklyn Borough President Eric Adams posed in front of a cluster of television news cameras. His aides handed out pamphlets emblazoned with a bulleted list of K2 side-effects like seizures, violent behavior, and death. Police officers milled on every corner.

"Right now, a lot of people are waiting for the store to open," Manning said, pointing across the street to a tiny smoke shop called Dream Burner (the shop could not immediately be reached for comment). "When the cops go, the shop's going to open up and they're gonna sell mad K2."

Adams hosted Wednesday's public awareness blitz in response to a mass K2 overdose on Tuesday that landed 33 people in the hospital. Witnesses in the area have increasingly reported people erratically wandering the streets and intimidating pedestrians near the Myrtle Avenue J/M/Z station. One man was seen standing in the subway station with his pants around his ankles, urinating and waving one arm in a repetitive, manic circle.

Often sold under the table at bodegas and smoke shops, K2 is an addictive substance made by spraying plant leaves with chemicals imported from China. It has numerous street names, from AK-47 to Green Giant, and bad batches have sent people to the hospital over the years. Users say it's appealing because it is cheap and—in Bed-Stuy at least—accessible.

"Usually this be packed over here [with users]," said a resident who declined to give her name, sweeping her hand across the intersection from her post outside of Dunkin Donuts on Myrtle Avenue on Wednesday. "You come out of the store and they standing here, holding the doors and asking for a dollar. It's crazy." 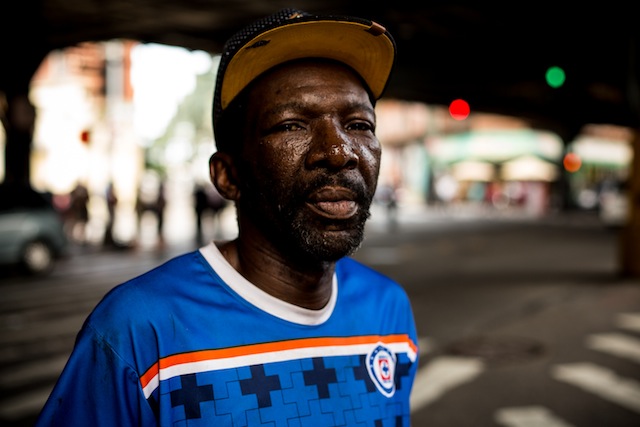 The NYPD raided Big Boy Deli on the corner of Myrtle and Broadway on June 30th, and one worker was arrested and charged with unlawful sale of K2. Police sources told DNAInfo that they believe Big Boy sold the tainted batch that sickened 33 people.

"I'm not impressed," said Brian Arthur, a local resident who recorded some of Tuesday's hospitalizations on Facebook Live. "They come and clean it up, and then a couple days later these guys are back out here covering that corner. It’s affecting the quality of life in this area."

"Last night when I was leaving to go to work, the same gentleman they took to the hospital was back out here again, stumbling and falling," he added.

A spokeswoman for the department confirmed that the raids had been planned for later in the week following a recent uptick in K2 complaints, but were moved up after yesterday's mass overdose. No K2 was recovered. 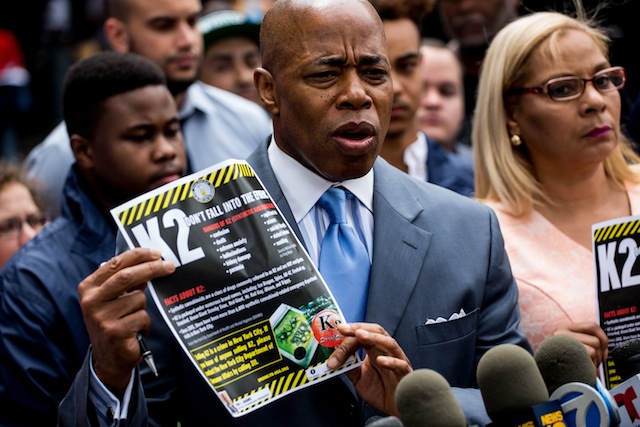 Adams's office has been receiving complaints about K2 at Myrtle-Broadway since last summer, when tabloids were focusing on a similar situation in East Harlem. The mayor's office quickly launched a K2 task force and, last October, criminalized the sale and distribution of the drug.

Individual distributors now face fines up to $5,000 and a year in prison, and shops can be slapped with civil fines up to $10,000. Bodega owners found guilty of selling K2 face the potential loss of their lucrative tobacco licenses.

According to the Mayor's office, K2-related hospitalizations have decreased 85% since July 2015—from 1,200 cases at peak to about 180 this March.

"We will throw the book at anyone selling K2," said Mayor de Blasio at an unrelated press conference on Wednesday. "If you're selling this drug we have the ability to shut you down. We will literally take away your livelihood."

DNAInfo reports that the 81st Precinct has launched civil court proceedings to have Big Boy and Dream Burner shut down in accordance with the controversial nuisance abatement law—a circa-1970 law that empowers the NYPD to bring to court any business owner allegedly harboring illegal activity.

Despite these efforts, Manning insists K2 "is all over. In smoke shops, everywhere. If they stop it over here, they got it in the Bronx." 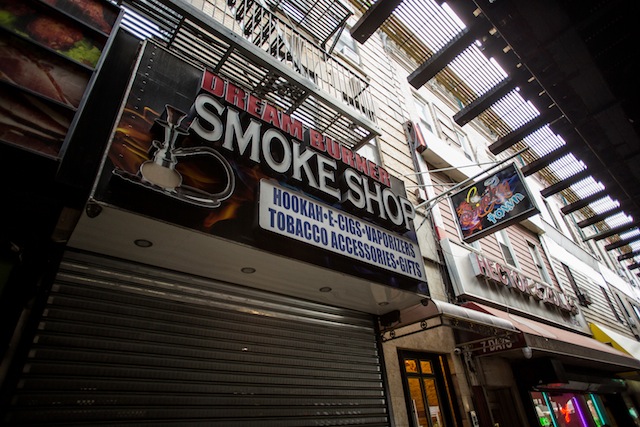 Manning says he's smoked K2 for more than a decade, and that the drug makes him hallucinate. "You think people going to hurt you. So that make you hyper," he explained.

But the drug's relative accessibility is appealing. "The K2 is taking over the weed," he said. "It's cheaper, and it's a better high. It keeps me on my feet. Now when I ain't got it, I feel sad."

"If there were an alternative to it, it would be much cooler," said a 27-year-old homeless man who declined to give his name. "I do it just to get high. I was on marijuana first, and then K2 came out. It was cheaper."

Marijuana is also policed. "If [my friends] buy weed the cops are giving them tickets all over," the 27-year-old said.

The city decriminalized possession of marijuana in 2014, but smoking in public or possessing weed without an ID (which cops need to write a summons) still merits an arrest. A recent report from the Police Reform Organizing Project shows that while marijuana arrests decreased considerably last year over 2014, arrests have since jumped back up—4,225 between January and March of 2016, compared to 2,960 during the same period in 2015.

"The government should legalize the weed, so people won't smoke the K2," the 27-year-old added. "The effect is different, but the main thing when [people] go to smoke is they want to get high, any way."