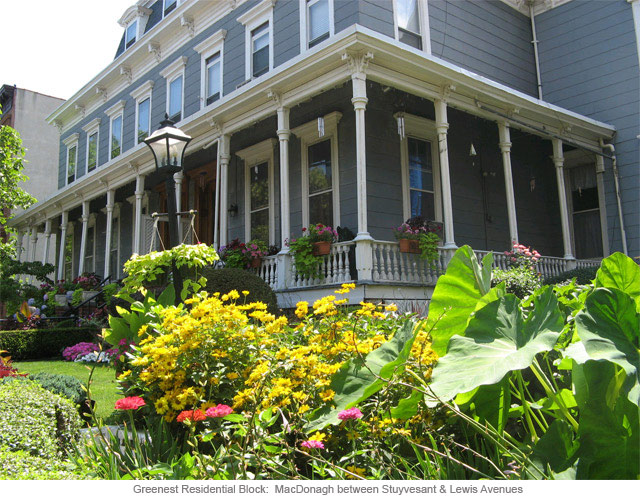 Beautiful lawns, flowering bushes, and planters with lush greenery: This morning, the Brooklyn Botanic Garden announced the winners in its 13th annual Greenest Block in Brooklyn Contest. The residential first place winner was MacDonough Street between Stuyvesant and Lewis Avenues in Bedford-Stuyvesant (pictured above) while first place for a business/commercial block was Hoyt Street between Atlantic Avenue & State Street in Boerum Hill (pictured below).

MacDonagh Street's Greening Coordinator Wilma Atwell said, "Our hard work and commitment to keeping our block beautiful has had many positive results, including cars slowing down to take in all the surrounding beauty, along with the good feeling and pride that our neighbors on the street share with one another." And Nat Hendricks of Nat Hendricks Real Estate, the Greening Coordinator for Hoyt Street, said, "the greatest reward is the sense of community that develops from everyone pitching in – from planting containers of colorful flowers to taking loving care of the trees outside their storefronts, along with the heightened attention to the tree beds this year." He also added that block was fortunate to "be able to use coffee grounds from the Victory Café as a key ingredient in our mulch!” 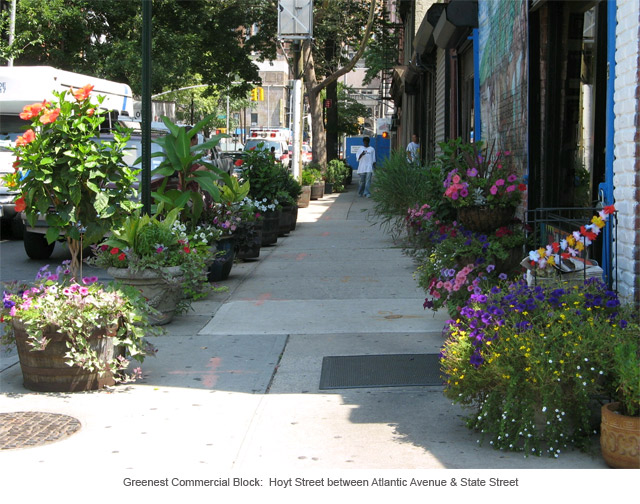 Fifty blocks participated during the first year of the contest, but this year, 230 blocks entered. The contest is managed by the BBG's community environmental horticulture program, Brooklyn GreenBridge, which works with neighborhood and community groups that are starting new gardening projects or continuing existing programs, and offers free workshops and trees, plants, seeds, etc. throughout the year.

Some other winners: This year's Best Windowbox winner is Wendy Weekes of East 38th Street in East Flatbush, and second and third place in this category was awarded to residents on 8th Street and 10th Street, respectively, in Park Slope. The Best GreenBridge Windowbox Kit was awarded to Gloria Lormonie-Arnell of Rutland Road in Lefferts Gardens. The winner of Best Street Tree Beds, a new category, went to East 49th Street between Lenox Road & Linden Boulevard in East Flatbush. And the Greenest Storefront is Miracle Grill, on the corner of 7th Avenue and 3rd Street.

More information here and more winners after the jump: