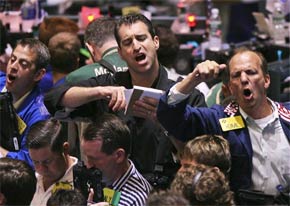 The economic downturn is affecting everyone--including the very rich. The Post has some interesting stats and anecdotes about wealthy couples driven to divorce

Divorce lawyers at white-shoe firms claim they have many more cases these days, thanks to out-of-work investment bankers and their expensive lifestyles. Lawyer Joshua Forman, who says divorce filings are up 20%, explained, "They have to cancel the country-club membership, no more expensive summer camps, cancel the three-week trip to Europe. It's hard to keep up with the Joneses when your job's in jeopardy. And it takes a toll on the marriage."

Still, it's hard to feel that much sympathy when the cautionary tales are about people who make more than $1 million a year and are fighting over Hamptons rentals, expensive summer camps for kids, and shopping sprees. Hey, Phil Gramm is totally right about us being a nation of whiners! Also doing well during the economic unrest are couples counselors. One whose clients include many laid-off Bear Stearns employees said husbands have been struggling with breaking the news to families while wives assume their husbands should be able to keep up their lifestyles no matter what.

#business
#divorce
#economy
#wall street
Do you know the scoop? Comment below or Send us a Tip