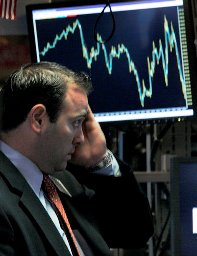 The NY Times reported the Dow Jones Industrial Average "flirted with bear market territory" when it fell 120 points--"The bear peeked out of its cave on Friday. And then it retreated." The Dow Jones is close to a bear market, because it's down 20% (the "threshold for a so-called bear market") from its October high.

A consultant tells USA Today, "Oil's back in favor, especially with people bailing out of the stock market." And some analysts expect oil barrel prices to rise to $145-150, while the president of OPEC thinks they could rise to "between $150 and $170 a barrel this summer."

According to CNBC, investors aren't panicking. Financial consultant Michael Kresh said, "In the backdrop of what we're looking at, with enormous spending in Iraq, ridiculous oil prices, a near collapse of the financial markets, it's not really all that bad."