Falling is the number two cause of unintentional death in the United States (number one is accidental poisoning, typically from prescription drug overdoses), and walking to work this morning is a real Final Destination-type journey. While many sidewalks have been partially cleared of snow from Saturday's blizzard, much of the melting runoff from yesterday has frozen into a slick sheen of onyx ice hungry for victims. Twitter never lies:

Ok so whose idea even was it to make ice and sidewalk look the same at night? I'm gonna sue I almost died

Please DM Nathan if you want to join that class-action lawsuit against ice. In the meantime, here is a helpful guide to not breaking a hip. In a nutshell, you should walk like a penguin by keeping the center of gravity on your front leg. 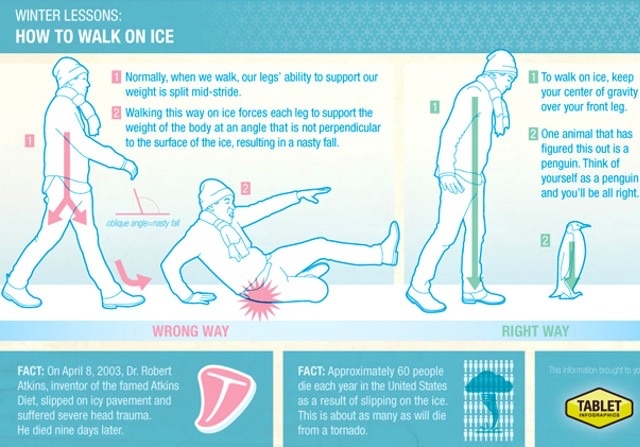 Don't worry, all those people laughing at your penguin walk are going to fall and break their wrists any second now.

To be sure, we've seen worse ice than what's glistening out there this morning, and by this afternoon temperatures in NYC will rise above 40 degrees, which not even the blackest of black ice can survive. We're gonna beat this thing and, with a little luck, survive to accidentally poison ourselves tonight!

Did you fall on the ice and go boom this morning? Send us an email; we want to share your story with the world.

#danger
#fear
#ICE
#service journalism
#warnings
#winter
Do you know the scoop? Comment below or Send us a Tip