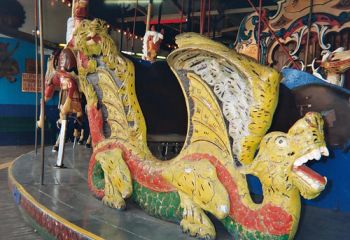 Last fall it was announced that consultants were being sought out for the restoration and reconstruction of the historic 1919 B&B Carousell of Coney Island, which was bought at auction by The City of New York in 2005. The Brooklyn Eagle reports that yesterday the carousel was finally in the hands of experts as "fine art movers arrived at the Brooklyn Army Terminal (BAT) to delicately pack up Coney Island’s 89-year-old Bishoff & Brienstein Carousell. The entire team of colorful antique horses and other carousel components will be temporarily transferred to Marion, Ohio, where it will be meticulously restored by a nationally recognized expert in the field."

Upon its restoration it will be moved back to Coney Island into a custom-built home (Steeplechase Pavilion), all shined up in its original glory. Costing the city $1.8 million dollars upon purchase, this process will undoubtedly add another hefty sum to the original pricetag.

Along with the wooden carousel (which is the only of the original 25 that's left), the Gebruder band organ will also be restored, along with the brass ring device and ticket booth. Don't expect to take a spin anytime soon however, the completion of the process isn't expected to happen for another 2 or more years.

#B&B Carousell
#carousel
#coney island
#ohio
#restoration
#Steeplechase Pavilion
#wooden carousel
Do you know the scoop? Comment below or Send us a Tip
A new Gothamist is coming! We’ve moved comments over to our beta site. Click here to join the conversation and get a preview of our new website.