It sometimes feels as though every square inch of New York City has been smothered in aggressive and enervating consumer messaging. The delivery apps are borderline sociopathic. Times Square is an increasingly pixelated sensory assault wrapped in millennial pink misogyny. Nearly ten thousand digital video displays will soon plaster the subway, in case your commute didn't already resemble a Black Mirror episode. And those are just the land ads.

For the last few months, New Yorkers have reported a massive LED billboard floating through Manhattan's near-shore waters. On both sides of the island, the boat has been spotted hauling a double-sided, 60-foot screen blaring high-definition digital ads for a range of products—Heineken, private helicopter trips, and the Walking Dead among them. According to industry experts, it's the first time that a watercraft dedicated to advertising has taken up station on the city's rivers.

"It's disgusting," said Marcy Benstock, director of the Clean Air Campaign and the Open Rivers Project. "People go to the river to contemplate, to do yoga or meditate or just relax. Then this giant billboard comes along—what a nightmare!"

FFS. Is nothing sacred?! Now, NYC has a barge with a huge ass LED display?! 🤮🤢 pic.twitter.com/L0na2VrVIV

The barge belongs to Ballyhoo Media, a startup that bills itself as a "water-based multi-media company changing the landscape of outdoor advertising." It arrived in October, and drew the immediate ire of New Yorkers concerned that the city's shoreline had become yet another venue for invasive marketing. On Reddit, a frustrated attorney mounted a campaign urging residents to file 311 complaints against the eyesore. Others have suggested torpedoing the vessel with slingshots or airsoft guns.

So far, the city has been slow to respond to the novel advertising strategy, despite the fact that the company would appear to be in blatant violation of local zoning rules—"no moving or stationary advertising sign shall be displayed on a vessel plying waterways adjacent to Commercial Districts and within view from an arterial highway." Under state navigation law, jurisdiction of vessels operating within 1,500 feet of the shoreline would fall to the local legislative body.

Asked about the LED barges in early November, a spokesperson for the Department of City Planning told Gothamist that they are "working with other relevant agencies to determine how to best address this practice." We've followed up several times since then, but the agency has refused to say whether there are plans to take action against the company. The Mayor's Office did not respond to our inquiries, while a spokesperson for City Council Speaker Corey Johnson declined to comment.

"It doesn't add up that you can have a zoning resolution that says no billboards in New York waters, and no New York City agency is going to respond," the attorney leading the online Ballyhoo opposition, who requested anonymity, told Gothamist. "How can you let one of the few natural spaces we have left be turned into a new Times Square?"

Reached by phone, Ballyhoo founder and CEO Adam Shapiro told Gothamist that city officials haven't contacted him, and asserted that they couldn't do anything about the billboards anyway. "The code that's written for New York City basically ends at the end of the pier lines, so we're outside of that specific enforcement," he said.

But according to Jim Lane, an environmental attorney who also does personal injury work, the company's argument doesn't hold up to scrutiny. "Of course New York law applies even on federal property, as long as it doesn't conflict with a federal law," he said. A person caught stealing on the Circle Line, for example, would not require a federal case to be brought to justice—they'd be arrested by local law enforcement. "If we assume the correctness of the pro-billboard argument, we arrive at ridiculous conclusions. This is a reason to reject the argument."

Pressed about the legality of his business model, Shapiro noted that "the city of Miami initially challenged us, and we're still operating there today." Indeed, the only other existing Ballyhoo barge debuted in South Beach last year, and was swiftly deemed a nuisance by local residents. Miami officials pledged to outlaw the waterfront advertising, but found that the relevant city law pertains only to Biscayne Bay. Beach Commissioner Kristen Rosen Gonzalez has vowed to continue fighting the company, and reportedly suggested that Ballyhoo "might have better luck up North." (Thanks, Kristen!!!) 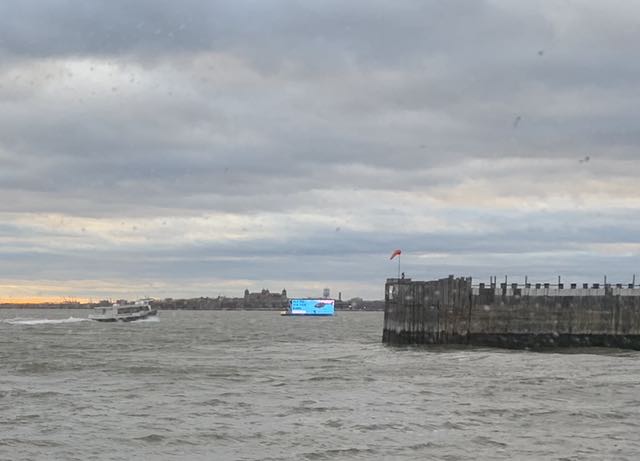 For now, Shapiro says that the contentious billboard will continue making its daily voyages around New York City—beginning on the west side near the Intrepid, traveling past the southern tip of Manhattan, and ending at Roosevelt Island. He said the company didn't have current plans to add more boats in New York, but will likely expand to other cities. The backlash to the barge, and the possibility of copycat companies transforming the city's tranquil waterfront as we know it, doesn't bother him.

"We're seen by millions of people every day, and we can't expect everyone to like us," Shapiro said. "I've never once thought in my own personal view that this disrupts my peace."

#ballyhoo
#barge
#east river
#hudson river
#waterfront advertising
#original
Do you know the scoop? Comment below or Send us a Tip