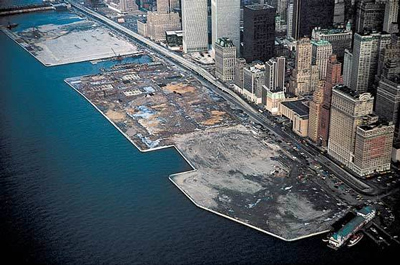 Developer Charles J. Urstadt, the man behind the creation of Battery Park City in the 1970s, is eager to duplicate the feat further north up the Hudson by creating an additional 40 to 50 acres of Manhattan real estate. How? Well, by depositing fill dredged from Lower New York Bay.

Urstadt estimates that the city could create land for $75 a square foot that could be worth $2,000 to $3,000 a square foot when developed as waterfront property. The 100 acres that comprise Battery Park City were created in a similar fashion using landfill excavated during the construction of the World Trade Center.

Critics deride the idea as silly, environmentalists as dangerous to river life, and Urstadt faces an uphill battle, but what he's proposing certainly isn't unprecedented. Most of modern Manhattan's waterfront was created by fill dumped into the Hudson and East Rivers. This map from a 2005 show called "Center of the World" illustrates how much of what we consider to be the normal dimensions of the island have changed over the last three centuries. Before 1970, the Hudson River came all the way up to West St. in lower Manhattan. "Secrets of New York" has an interesting segment on the history of Manhattan's expanding shoreline over the years.

Such waterfront reclamation projects aren't without risk. Relentless extension of the waterfront of Hong Kong––a city suffering from similar geographic real estate constraints and high property values––have made waterfront access extremely difficult for most residents and come at significant environmental costs. Recent studies have also shown what could be in store for waterfront NYC property in the event of a catastrophic flood, if global warming leads to higher ocean levels and more frequent flooding.