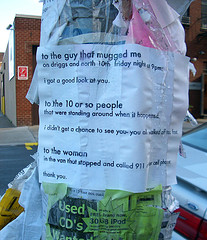 Last month women were being attacked in Williamsburg, and now it's being reported the number of muggings have gone up significantly in the area as well (though muggings are not uncommon in the area).

The Brooklyn Paper reports that the victims all seem to be...drunk hipsters (though they use the phrasing: slightly tipsy pub-crawlers and late-night subway commuters). Whatever you want to call these particular locals, Williamsburg's 90th Precinct officers say that this demographic is becoming "increasingly targeted".

Last week there were 14 in muggings in 7 days, a number that has doubled since the same week last year. Most of them are occurring "in the hip areas around Meserole Street and Montrose Avenue, and the intersection of Lorimer Street and Broadway." Deputy Inspector John Corbisiero stated “They’re trying to rob people who are intoxicated, frankly. They come up from behind and hit them.” In the cases mentioned, each victim was attacked from behind, punched in the face, and then had their wallets and pockets emptied. One woman at the Marcy JMZ station was surrounded by two men at 10pm but witnesses detained them.

The police recommend walking in groups, not flashing money, cell phones or anything of value, and calling 911 immediately if you are mugged or attacked. As for them, they have arranged to have more officers on the streets from midnight to 8 am.