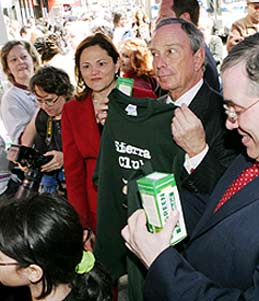 Barnard students, though, had very mixed reactions. The Columbia Spectator got a few:

“Bloomberg is speaking at Barnard? I think that’s atrocious,” Svati Lelyveld, BC ’08 said. “First, it’s a women’s college. Second, under Bloomberg, jail construction has gone up ... there have been all sorts of criminal injustices—criminal justice injustices. I don’t think he has anything this women’s college needs except for money.”

“I think it’s awesome, and I’m definitely going to go see him speak,” Aja Hazelhoff, BC ’09, agreed. “It’s a good thing for Judith Shapiro’s exiting graduation, and it’ll be good publicity for Barnard.”

Barnard's Board of Trustees chair Anna Quindlen said, “Mayor Bloomberg’s achievements and intellect perfectly reflect the ambitions of our students and the accomplishments of our alumnae. And as the father of two successful daughters, he is ideally positioned to speak from the heart to members of the class of 2008.” Guess the various lawsuits contending he created a "culture of discrimination" against women at his company won't be mentioned.

#barnard college
#class day speaker
#columbia
#mayor bloomberg
Do you know the scoop? Comment below or Send us a Tip