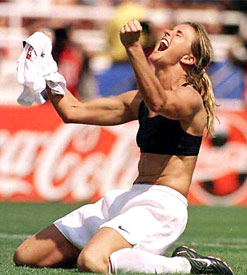 A 1992 NY State Appeals Court ruling that we'll definitely keep in mind: Women have the right to go topless since men can show their chests whenever they want (like this guy). This equal opportunity decision wasn't something a police officer was cognizant of when he arrested Jill Coccaro, who was walking around topless in August 2005 (she was trying to cool off).

Coccaro, also known as Phoenix Feeley, sued in October, citing that she was manhandled during the arrest (the cop yanked her out of the patrol car by her hair and ripped her pants), held for 12 hours before the DA's office decided not to press charges and was forced to go to Bellevue for a psych exam. Coccaro/Feeley was walking on Delancey at 1:30AM, but, hey, August nights can get hot. The city has now settled the incident for $29,000, or $14,500 per breast.

The Post's headline is "BUST'ED GAL PAYOFF" while the Daily News has "Bra-vo! $29G in topless suit. We guess using "City" and "Titty" would have been too crass. Coccaro/Feeley's lawyer Jeffrey Rothman told the Post, "The thing the cop did not seem to understand, and what's so problematic, was that it was Phoenix who would decide what parts of her body would be exposed," and told the News, "It was a civil rights settlement. We hope the police learn a lesson and respect the rights of women to go topless."

Coccaro/Feeley's friends held a topless protest for her that the Observer, er, observed in 2005. One man said, "Leave people alone, you know? If we can do it, why can't they? More fun for me!"

Coccaro also took off her shirt after running the NYC Marathon in 2004; remember when Brandi Chastain revealing her sports bra was a huge deal?