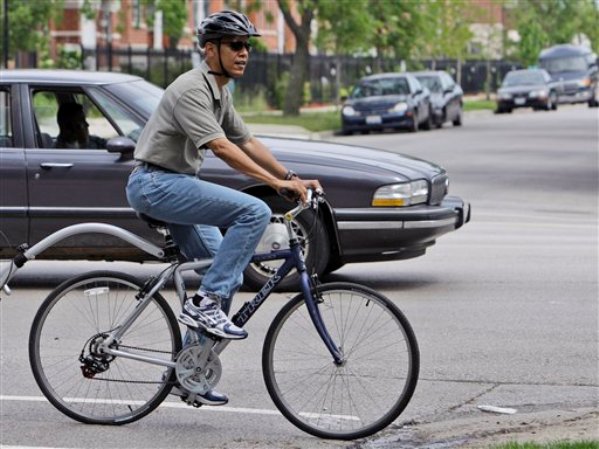 Democratic presidential contender Barack Obama's weekend bicycle ride is still being parsed. To some, his bicycle seat seems too low. To others, his tires seem flat. And to many, his outfit just seemed like a way to look dorky, maybe because he's so cool.

Commenters on the Huffington Post wondered why he was biking in jeans. The Chicago Tribune's Eric Zorn noted that "politicians are now best advised to avoid helmets of any sort" (flashback: Michael Dukakis in the tank). Newsweek recalled Seinfeld (burn!). And the Daily News has feedback from two NYC style mavens. Barneys creative director Simon Doonan said, "I like seeing my politicians in goofy weekend attire. It means they're thinking about more important stuff."

#barack obama
#election 2008
#fashion
#Michelle obama
#Politics
#Simon Doonan
#tim gunn
Do you know the scoop? Comment below or Send us a Tip
A new Gothamist is coming! We’ve moved comments over to our beta site. Click here to join the conversation and get a preview of our new website.