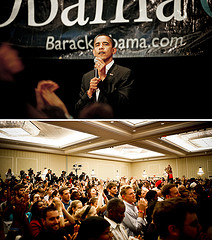 Last night Barack Obama came to Brooklyn to join supporters and community members at The Marriott Hotel on Adams Street. The event was set to begin at 7pm, and for hours prior to that (even after doors opened at 5:30) crowds filled the streets around the hotel - many waiting to get a glimpse of the candidate and many just waiting to get in! It turns out the event was oversold, a reader tells us a volunteer came out and said, "Well, you know, some folks brought their grandmothers or girlfriends along, and then the Marriott changed the size of the stage so we just couldn't handle all the folks with tickets. Sorry. Give us your name and a contact number and we'll get back to you." Tickets for the “Official Brooklyn for Barack Kick-Off” were only $25, a far cry from the $1000 pricetag on the July 24th event held at the Brooklyn Heights home of Nina Collins.

With a lot of support in Brooklyn, the right-leaning National Review asks if people are just too caught up in his charisma to really listen to what he's saying.

For instance, take Obama’s remarks on energy: “People are fed up with the lack of energy strategy in this country. Why is it that we’re paying three bucks at the gas tank?” First of all, who’s he talking to? Less than half of New York City residents own cars. Second, making cars more expensive to drive happens to be all the rage in this city right now. 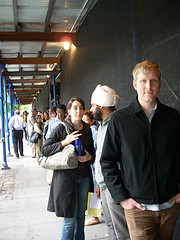 says, "Obama was otherwise self-effacing as he looked to connect with the New York crowd by recalling his days living in a Park Slope apartment when he attended Columbia University and for some time afterward." He joked about not being able to afford to live there now...but the Park Slope babies have his back anyway. From the enthusiasm being reported today, it seems he connected with the Brooklynites just fine, gas price talk aside. And when asked why voters should vote him over Hillary, he replied, "We can pull the country together." More on last night's event here, did anyone go and not get in?

Obama also stopped by The Daily Show and gave John Stewart and viewers 11 full minutes of his time. He Twittered earlier yesterday saying he was on his way there, but hasn't updated since. The Daily Show has been talking to a few Presidential candidates as part of their Indecision '08 coverage. Watch the video of Obama/Stewart (has a nice ring to it) here.