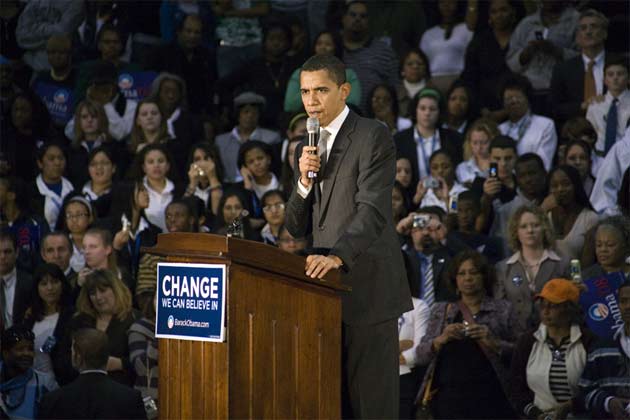 Democratic presidential hopeful Barack Obama made a campaign swing into our neighborhood yesterday, drawing a crowd of thousands to Yanitelli Center at St. Peter's College, and as well as supporters to a fund-raiser in Midtown last night. At St. Peter's, He told the audience, "I'm not running because of long-held ambitions. I'm running because of what Dr. (Martin Luther) King called the 'fierce urgency of now.'"

Obama also complained about his opponents trying to seize upon his relative inexperience in Washington as a reason not to vote for him and drew upon a theme of hope. From the Star-Ledger:

Hope isn't "wishful thinking," he said, then referred to slaves, abolitionists, union organizers, women, and the young crusaders of the Civil Rights Movement who rolled up their sleeves to get things done. His father abandoned the family when he was 2, Obama said, leaving his mother and grandparents to raise him. "All they could give me was love, education, and some hope," Obama said.

His criticism about his main rival, Hillary Clinton, was apparent, if "oblique." While saying Clinton uses polls to aid policy-making, Obama said, "We can't poll test every position because we are worried about what Mitt or Rudy will say."

And at the fund-raiser, held at the Grand Hyatt, brought in $700,000, celebrities like Iman, Spike Lee and Richard Gere were present (Iman said Obama's NH 2nd place showing was "nothing" and a "glitch"). The Post reported that while Obama listed what he's been doing ("a lot of traveling, a lot of planes... a lot of automobiles, a lot of handshaking, a lot of picture-taking, my retinas burned, singed..."), someone yelled, "Don't cry!"