Barack and Bill Have Cosi Lunch 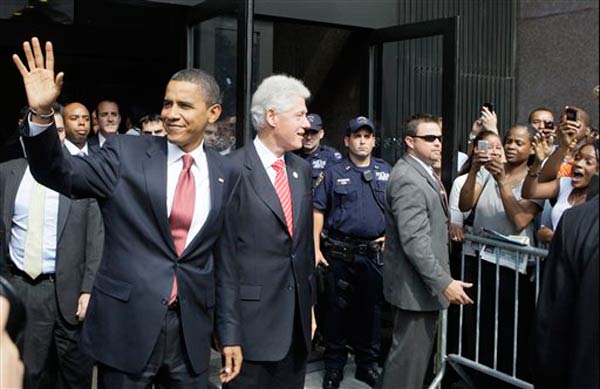 Barack Obama and Bill Clinton just had lunch at Clinton's Harlem offices. The Observer shared the pool report and points out it included this line: "There was no handshake and your pooler did not see the two actually look at each other. There was a brief Q&A." Some more excerpts:

President Clinton was asked when he will hit the campaign trail for Sen. Obama.

“I’m going out there as soon as my Global Initiative is over.’’

Q: “Will you be out frequently?”

“I’ve agreed to do a substantial number of things. Whatever I’m asked to do.’’

Q: "What do you think of the state of the race?"

President Clinton: “I predict that Sen. Obama will win and win handily.’’

Sen. Obama: "There you go. You can take it from the President of the United States. He knows a little something about politics."

Obama will be heading to visit the World Trade Center site later this afternoon with John McCain. McCain was in Shanksville, PA earlier today, for a 9/11 commemoration event there. 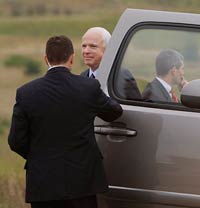 Victims' relatives seemed pleased by the prospect of the candidates' visit. Sally Regenhard told the AP, “I assume that they’re coming down here to pay respects to the people who lost their lives and to really affirm the fact that this is sacred ground for America. I hope they will support federal health care programs for the heroes who so valiantly searched for our loved ones and lived to pay the price with their deteriorating health today.”

Obama and McCain, who promised not to air any ads today, will then appear at the ServiceNation Summit at Columbia University. They will speak separately about service--as well as answer questions--in a televised broadcast (it'll be on PBS, CNN, MSNBC, etc.) at 8 p.m. However, there will be about a thousand audience members, including 100 Columbia students who won a lottery. Before they speak, Governor Paterson will make opening remarks--and actor Tobey Maguire is also expected to speak.

#barack obama
#bill clinton
#cosi
#john mccain
#ServiceNation
Do you know the scoop? Comment below or Send us a Tip
A new Gothamist is coming! We’ve moved comments over to our beta site. Click here to join the conversation and get a preview of our new website.