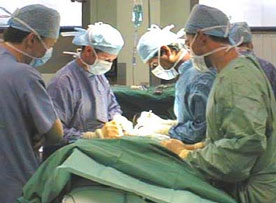 The sales manager at a Long Island reception hall donated one his kidneys to a rather new friend: A client whose wedding he booked in 2003. Rick Bellando works at Oheka Castle in Huntington, Long Island and rented the historic mansion to Matthew Fulgieri and his bride and became friends with the pair while helping them plan their wedding.

Fulgieri, a 42-year-old father of two in Queens, was diagnosed with polycystic kidney disease--a fatal condition and the one that killed his mother. His doctors informed him that both of his kidneys would fail within a year. That is when Bellando offered his customer one of his own. The Daily News describes how the offer came to pass.

Bellando said he never "in a million years" thought he would donate a kidney to his newfound friend, particularly since one of Fulgieri's brothers was prepared to make the sacrifice.

But when tests showed Fulgieri's brother was not a suitable match, Bellando, who has three young girls, said he couldn't bear to watch the disease take the family man away from his wife, Mamie, and young boys.

After 60 hours of tests, Bellando turned out to be a perfect donor match for Fulgieri and he offered to save his life. The two underwent a transplant operation last month and at this time, Fulgieri has been recovering and returned to work Doctors expect him to survive his disease.

About 6,000 die annually waiting for an organ transplant. Medline has dozens of links on the practice of organ donation and transplants. As of this afternoon, 98,158 people are on the waiting list to receive needed organs in the United States.