A group of artist activists has jumped on the Banksy bandwagon with a new street art piece at the Washington Heights spot where SUV driver Alexian Lien was attacked by a group of enraged motorcyclists following a collision on the Henry Hudson Parkway that left one biker paralyzed. Among the alleged assailants was off-duty detective Wojciech Braszczok, an undercover officer assigned for years to infiltrate Occupy Wall Street. The activists behind the mural, Right of Way, say they've "borrowed" Banksy’s stenciling style "to highlight the NYPD’s active role in traffic violence." According to their statement:

The work is on the beige scaffold visible in the well-known video of the assault on Alexian Lien. The central figure in the image is Banksy's "Protester," except that the iconic bouquet of flowers has been replaced by the motorcycle helmet used by an NYPD undercover to smash one of the car windows. The biker gang has been replaced with scooter cops, who are notorious for harassing peaceful Critical Mass bike rides. And the officers look on with smirks on their faces. 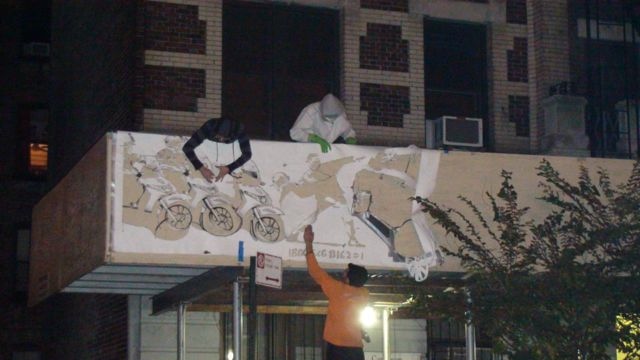 The work, which references Banksy's famous image of a protester throwing a bouquet of flowers, went up last night around 7 p.m. The phone number on the image leads to a voicemail message similar in tone to Banksy's recordings. The voice on the recording tells callers:

Today, Banksy has set his sights on the NYPD, pretty easy target, right?

This piece is located on the corner of 178th St and St Nick's, where Alexis Lien was beaten by a group of motorcyclists, one of whom was an undercover cop that spied on Occupy Wall Street Protestors.

This is the first piece in Banksy's New York residency where he has altered one of his previous works, the Protestor, depicting him as the under cover cop who smashed Alexis Lien's window. He seems to be saying that your typical violent protestor, is probably a cop. The gang of motorcyclist is replaced by scooter cops, notorious for harrassing peaceful critical mass bike rides, looks on smilingly, fully supportive of this violent behavior

This particular piece seems to be commenting on the NYPDs active roll in traffic violence, which kills more than 250 New Yorkers every year. When undercover police officers take up helmets and smash windshields and off-duty cops drive drunk and kill pedestrians on sidewalks, it should be no surprise that they show up to the scene of children being run over by reckless drivers and declare No Criminality Suspected.

Yet apparently they suspect a lot of criminality in a little street art and hunt down the artists relentlessly. We'll see.... 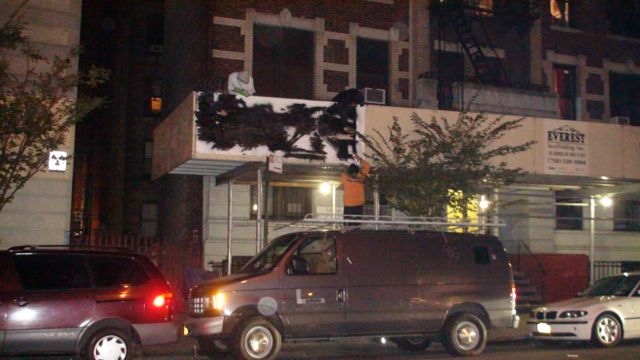 “We have modified Banksy's ‘Protester’ to show that the stereotypical violent protester is often an undercover cop,” said Keegan Stephan, organizer with Right of Way. “And we have expanded that message to show that the NYPD facilitates many types of violence. Here, we are highlighting their participation in traffic violence. Off-duty cops are driving drunk and killing New Yorkers; undercover cops are riding with motorcycle gangs that speed, ride recklessly, and worse; and on-duty cops almost always declare deadly drivers faultless and instead blame their victims. We need a wholesale shift in the NYPD’s attitude toward violence." 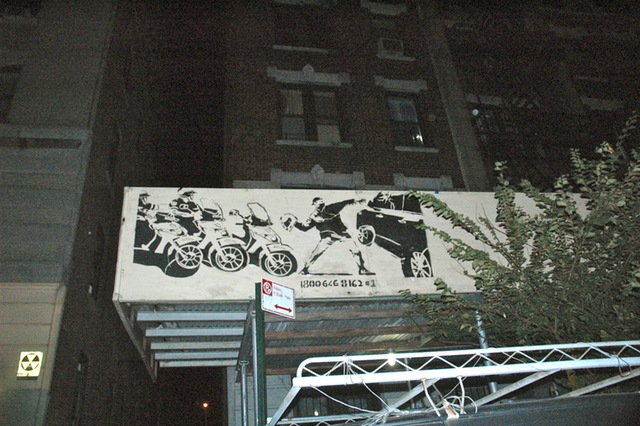 #motorcycle rally road rage
#right of way
#original
Do you know the scoop? Comment below or Send us a Tip