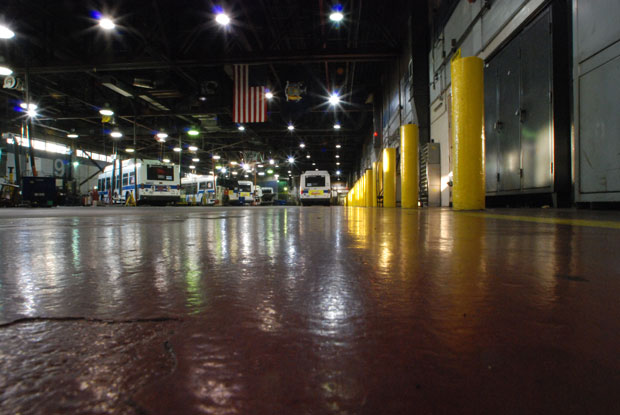 In 1988, the Jackie Gleason Bus Depot was renamed in memory of the Brooklyn native whose most famous role was acerbic bus driver Ralph Kramden on the classic television show The Honeymooners. In fact the logo for the depot is based on the title sequence for the show. The depot takes up several blocks on 5th Avenue in Sunset Park, across 36th Street from Green-Wood Cemetery. It is one of five that serves Brooklyn and its entire revenue fleet of 321buses is powered by compressed natural gas (CNG) which is cleaner burning than traditional diesel powered buses. In 1999, the depot was the first to have the CNG fueling systems installed

The depot handles almost all but the most extremely specialized maintenance in order to get 271 buses on the road for the weekday AM rush and 281 for the PM rush. Inside it is hard to really judge the scale of the immense building since it is filled with buses either ready to be put into service at a moment’s notice or in some state of repair.

We visited the facility over the weekend on a Transit Museum tour led by depot superintendent Fitzroy Lyte. After a bit of a snafu that required all the members of the tour to show ID, wait, sign in and wait some more all out in the cold, we were able to begin the tour.

The main floor is where all the storage, repair, parts inventory and cleaning take place. Above it are the offices and facilities for the drivers to relax, eat and exercise when they are not out on the road.

Now, we have to admit we aren’t the biggest fan of buses and it didn’t seem as impressive as a subway shop, but it did satisfy our curiosity of what goes on in that big building on 5th Avenue. Still, we were surprised to find out that the modern bus uses a great deal of electronics, has redundant systems, has a fire control system, uses air instead of hydraulics, and costs around $500,000 each. Although you would expect for that kind of money the MTA would spend the extra $500 or so to stick a bike rack on the front.

We should also note that the depot houses several of the Transit Museum’s fleet of vintage buses. When we visited they were getting one ready to put in service to run on a regular Manhattan crosstown route during the holiday season. There will be seven historic buses running around Manhattan and since they don’t have air conditioning, winter is the perfect time for them to run since they all have heat.