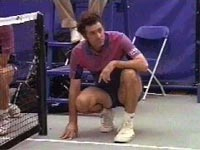 Open tryouts for ball boys and ball girls at the U.S. Open was this Thursday at the National Tennis Center in Flushing, Queens. Anyone can show up and run the drills set by the USTA's Director of Ballpersons. The tryouts themselves have turned into a sort of perennial institution and even made their way into an episode of "Seinfeld", when Kramer became a ball boy. Nearly 400 candidates sprinted, threw, and otherwise exerted themselves at this year's tryouts. They were competing for 75 spots as rookie ballpersons. We have to wonder how many of the candidates were members of the press, with an eye towards writing about their tryout experiences.

Elizabeth Solomon exhibited her on court ball collecting and throwing skills for The New York Sun. She noticed an awful lot of teenagers who had been practicing for the chance to share the court, or at least the sidelines, with their tennis idols once the U.S. Open gets underway. Solomon is not expecting a call back for further trials and an interview. She concludes that being a ball person is harder than it looks.

Dorian Block was the Daily News' representative at the tryouts (what, guys don't get assigned these stories?). Block describes a less-than-stellar experience where all of her graceful moves learned in ballet classes did not make the trip across the East River with her. Her throwing also needs some work, according to Block herself and her evaluator. And then there's the on-court composure issue: "There is no smiling," she was told by a tennis pro instructor as Block laughed at her errant throws. The News story has an amusing slideshow of Block's efforts.

An interesting coincidence between the two stories, in Solomon's account for the Sun:

Finally, it was my turn. I walked onto the court, where an evaluator named Dorian instructed me to chase the ball, and then get off the court as fast as I could.

We hope that wasn't the News' Dorian Block also trying out her skills as an evaluator on a fellow reporter.