Bailout Talks Stall, Market Looks to Decline ... Or as Bush Says, "If Money Isn’t Loosened Up, This Sucker Could Go Down" 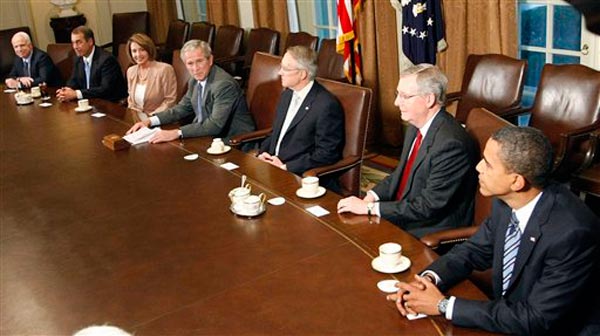 After key lawmakers felt a bailout plan agreement would be reached, talks "imploded" as the day progressed. Here's how the NY Times reports what happened:

The day began with an agreement that Washington hoped would end the financial crisis that has gripped the nation. It dissolved into a verbal brawl in the Cabinet Room of the White House, urgent warnings from the president and pleas from a Treasury secretary who knelt before the House speaker and appealed for her support.

“If money isn’t loosened up, this sucker could go down,” President Bush declared Thursday as he watched the $700 billion bailout package fall apart before his eyes, according to one person in the room.

The Wall Street Journal described Paulson's actions as a "moment of levity in a rough day" (per sources--he had "interrupted a small gathering of Democratic leaders at the White House with a plea for them not to say anything that might blow up the troubled deal").

Talks ended last night because House Republicans decided to present their own plan--one that would require Wall Street to purchase insurance for mortgage-backed securities and include tax cuts and "relaxed regulation." Democrats accused the House Republicans of abandoning the existing bipartisan plan, while Republicans say their plan "does not leave the American taxpayers with the bag and makes sure that Wall Street pays for this recovery."

The Democrats also accused Senator John McCain of working with House Republicans and ruining talks. The Times' analysis questions McCain's decision to head back to Washington D.C. While he asked both parties to put aside their differences, wanting to essentially save the day by leading the country to a plan, the Times reports "Instead he found himself in the midst of a remarkable partisan showdown, lacking a clear public message for how to bring it to an end."

With this news, plus the failure of Washington Mutual, stock futures are indicating "sharp declines." Put your seat belt on for the roller coaster.