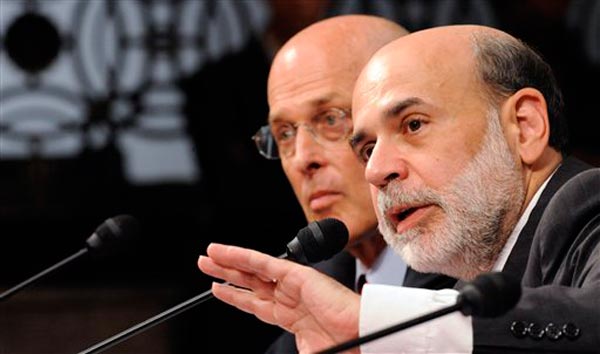 Yesterday was a mixed day for the financial sector. Congress still had questions about the government's proposed $700 billion bailout plan for financial firms, sending the market down. But the after-market close announcement that Warren Buffett would invest $5 billion in Goldman Sachs has sent stock futures higher. But now there's word that the FBI is searching for possible fraud at Fannie Mae, Freddie Mac, Lehman Brothers and AIG.

The Wall Street Journal reported that Secretary Treasury Henry Paulson and Federal Reserve Chairman Ben Bernanke "faced an unfriendly reception from the Senate Banking Committee." Bernanke warned that the "credit markets would seize up" if Congress didn't act soon while Paulson tried to reassure that the taxpayers wouldn't get screwed in the bailout deal. But, the WSJ notes:

Lawmakers pushed back against Mr. Paulson for seeking nearly limitless authority in how the program would be structured. Mr. Paulson remained on the defensive throughout, conceding that he would ensure oversight and enforce conflict-of-interest policies but sidestepping most questions over how. Lawmakers appeared unconvinced until the end.

Keep in mind, Paulson is former Chairman and CEO of Goldman Sachs.

The issue for Congress is less about the concept of a bailout, but the details--specifically, executive pay (why reward failure?), helping homeowners who face disclosures, what will American taxpayers get back in return. The NY Times's David Leonhardt writes, "Congress has done a pretty good job of identifying the biggest weaknesses in the Paulson plan, like its vagueness," but adds "There's no time to waste." Related: The NY Times looks at lopsided executive pay.

Just now, on CNBC, Buffett said, the credit crisis was "an economic Pearl Harbor," and pledged his support for Paulson's plan, "The market could not have taken another week...I think it was the last thing Hank Paulson wanted to do, but there's no Plan B for this.''