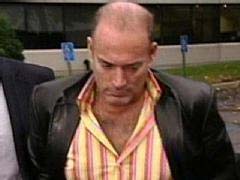 David Brooks, who is the subject of a pump and dump stock scheme investigation that allegedly netted him hundreds of millions of dollars, had the restrictions on his $400 million bail loosened this week by a judge who feels he's only a minor flight risk. Brooks was the CEO of DHB Industries, a maker of bullet proof body armor worn by the U.S. military and the NYPD.

Law enforcement became more interested in Brooks when a Dept. of Labor investigation showed that his company had sold sub-standard and defective bullet proof vests to law enforcement agencies and the U.S. Marines. With prosecutors' curiosity piqued, it soon came to light that Brooks and other executives were allegedly involved in securities fraud, by dumping millions of their own shares--at great profit--while maintaining that all was well with their company.

Brooks spent his ill-gotten gains profligately, hosting a $10 million bat mitzvah party for his daughter at the Rainbow Room that featured Aerosmith and 50 Cent, among others, as the entertainment. Despite Brooks's transferring large sums of money overseas, Judge Joanna Seybart seemed satisfied with the reasons for the transfers and is still requiring that Brooks wear an ankle bracelet monitoring device.

Federal law enforcement is currently searching for Sam Israel, the disgraced hedge fund operator who was requested to show up un-escorted for his 20 year prison sentence after he was convicted of swindling investors out of approximately $350 million. Israel chose to not appear for imprisonment.