On Sunday morning, Erin Humes got a call from his manager at The Bagel Store on Bedford Avenue in Williamsburg, telling him he had to come in and fill a shift because there was an incident at a local bar involving one of his coworkers. Mike Sapp, who had been scheduled, was clinging to life in an area hospital.

"At first I was just thinking, they're over-exaggerating, like it was a joke," he said.

It wasn't a joke. Sapp was comatose following what police described to Sapp's sister as "several fights" inside and outside a Williamsburg dive bar, during which they said he was the "verbal aggressor." A witness who came forward on Monday, the day doctors at Bellevue Medical Center pronounced Sapp brain-dead, described a bouncer decking Sapp in the street, knocking him out around 11:45 p.m., an hour and 45 minutes before police said they found him.

The accounts of three more witnesses, and a changed police narrative, complicate the question of who Sapp fought and who delivered the fatal blows on a crowded block of Bedford Avenue, and call into doubt whether it was Sapp or possibly another man who people saw fall unconscious at 11:45. Whatever happened, The Bagel Store is without a sandwich maker, cashier, and delivery guy, and his colleagues are missing him.

"We're all close, so everybody knows everybody," Humes said. "Everybody took it rough"

"[Sapp] was a cool dude and a hard worker," said Brandon Hayden, a cook at the store. "He loved to work."

Sapp clocked out around 4 p.m. on Saturday at the Metropolitan Avenue store location and told Hayden and others there he would meet them to hang out around 9, when they would be closing. In the meantime, he planned to step around the corner to have a beer and get a tattoo. That was the last they saw of him.

Tattoos loomed large in Sapp's friendship with Humes, from the moment he started at the shop a year ago, Humes said.

"It was always like a competition," he remembered. "Every time I got [a tattoo] he'd say, 'Oh, I got to get something.' And the next day he'd come in with a new one."

Hayden said people shouldn't be quick to judge Sapp's situation based on his appearance. 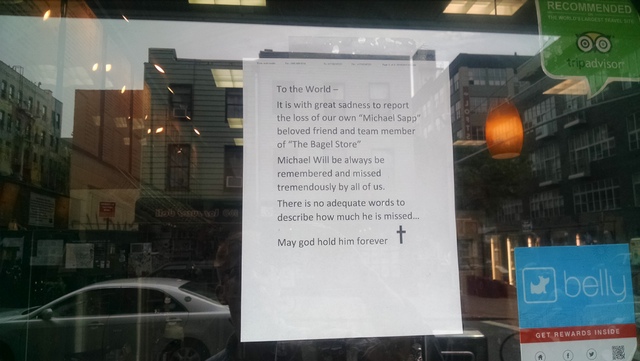 A close-up of the memorial notice in The Bagel Store's window. (Nathan Tempey/Gothamist)

Sapp's 15-year-old daughter was also a fixture in the shop. Erin said the team is still figuring out what it can do to help his family. Colleagues said they didn't know much about his personal life—that they only shared the occasional few beers from the bodega, and played basketball once or twice while waiting to pick up a check. 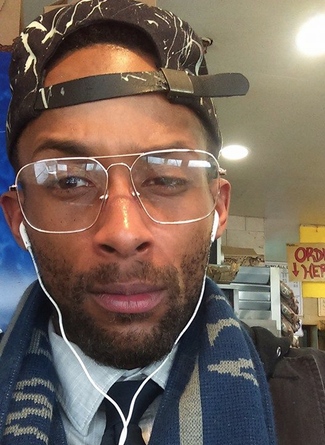 Sapp's Facebook postings show a man in turmoil, at once a loving dad who refers to his daughter as "my hero," a sharp dresser, a proud worker, and a cracker of jokes—and someone grappling with substance abuse problems and depression. In some posts, he boasts about working 18 hour days or achieving seven days of sobriety. In others, he displays his bloody knuckles and talks about wanting to get hammered. In one, written in September 2012, he writes: "I need to fuck really hard or get really high rite now. & then theres the ol tyme favorite drink really hard till Im really fucked!" Family and friends regularly wrote to ask where he was, or express concern for his wellbeing.

Sapp's older sister Ampora Yazdani worries that two recent leaks to news outlets by police—one saying that investigators are treating the attack on him as an act of self defense, and another quoting an anonymous official calling Sapp a "local tough" and laying out past arrests for assault and drunk driving—are meant to prepare the public for no arrest to be made.

"Even though [detectives] told us, 'The past is the past and he's the victim here,' I'm getting the sense from some of the things they did say yesterday that they're not treating him like the victim, because of his past," Yazdani said.

Yazdani has said her brother was a "firecracker" and had fought at bars in the past, but she said whoever punched him out can't have actually felt physically threatened by him, given how scrawny he was.

"My brother is a buck 50 wet," she said. "He's a lot of bark but not much bite. If [the assailant] was threatened for his life or felt like Mike was a threat to him, he should have called police or taken another way out other than harming him."

She said doctors disconnected Sapp from a ventilator yesterday. His family is planning a funeral for this weekend, and is raising money to cover the costs. 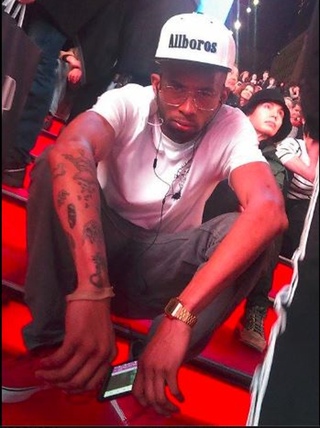 Michael Sapp was "a buck 50 wet," and not a threat, however much he ran his mouth, his sister said. (Facebook)

Police have not yet identified a suspect and did not respond to a detailed list of questions based on what witnesses have been telling us. Parts of what those witnesses have said are deeply contradictory, a reminder of why eyewitness testimony by itself is considered a shaky basis for criminal convictions. They are also a product of what from all accounts was a chaotic night on that stretch of Bedford Avenue, which was especially crowded because of the Northside Festival. But taken together, witness recollections, combined with the latest police narrative, suggest a basic timeline of events. Here is a rundown:

Last night, the Charleston broke its silence. An unnamed manager emailed a statement saying he or she could not comment in detail while the investigation continues, but that "as soon as [police] release their report on the incident, I will make myself available to speak to you freely." The manager rejected speculation that the bouncer who ejected Sapp was an off-duty cop, saying, "In the three years I have managed the Charleston, we have never employed an off-duty, on-duty, nor a retired police officer for any position." He or she continued:

When the facts surrounding this terrible tragedy are fully brought to light, it will be known that all the employees working for the Charleston that night conducted themselves in a professional and non-violent manner, despite being repeatedly threatened.

The manager did not respond to requests for elaboration or identification. The Charleston is one of several bars owned by businessman John McGillion. Others include Williamsburg's Alligator Lounge and the now-closed Lulu's in Greenpoint.