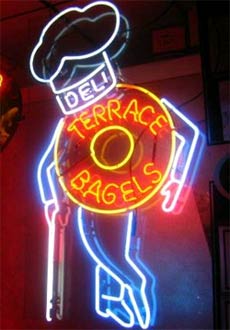 “It’s horrible. I don’t know what we’re going to do,” Arye Lewkowitz, owner of Daniel’s Bagels on Third Avenue, recently told Metro. “We’re going to have to sell a bagel for over $1.” Lewkowitz isn’t alone; bagel and bread prices are soaring nationwide due to the skyrocketing cost of wheat, which more than doubled in the past year in New York, from $5.31 a bushel to $14.22.

The main reason for the spike is drought in Australia, which produced 30% less wheat than usual in 2007, sending already high prices through the roof. And the demand for wheat has only increased as diets in westernizing Asian countries like China place a greater emphasis on meat, funneling vast amounts of wheat toward livestock feed. To top it off, biofuels made from wheat are growing in popularity, while many American farmers are switching from wheat to maize to take advantage of ethanol subsidies.

International wheat prices have increased by over 350% since 2003, with global reserves now at their lowest level since the early 1980s. All this has one of the biggest wheat distributors in New York talking about allocating his diminishing supply to his most favored customers. David Jaffe, a sales rep from Fodera Foods in Queens, which sells to roughly 70 Manhattan bagel shop and bakeries, tells Metro: “There is no raw material,” he said. “It’s crazy [to talk about allocations], but we’re getting there.”

At least $1,000 a bagel isn’t yet the norm! Are you feeling the pinch at your local bagel stop?

Photo of Terrace Bagels in Windsor Terrace by Betty Blade.