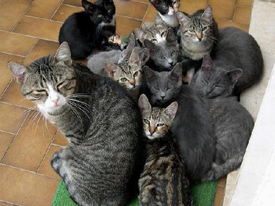 Tenants of 64 Troutman Street in Bushwick were joined by City Council members at City Hall Friday to announce a lawsuit against their landlord under the Tenant Protection Act. Passed last March, the law is intended to protect tenants whose landlords are trying to drive them out of the building using such tactics as turning off the hot water or ripping out the toilet.

Residents of 64 Troutman say conditions at their building have become unbearable since it was purchased last year by Heskel Properties. One tenant, Carolyn Jessup, revealed that since the ownership change, "I've lived through having the building torn down around me, having my staircase removed, having my heat and hot water shut off, and enduring a terrible smell that was found to come from a bag of dead cats someone had put in a vacant apartment in the building." (According to the Sun, the Department of Housing Preservation and Development discovered the bag of rotting cat corpses.) Other tenants say they've received threatening phone calls.

In April, City Room reported on the stench, but it was unclear that a bag of dead cats was the source, and the building manager played dumb, asking, "What do you mean it smells? I closed the door. What’s the big deal?" But tenants say the foul odor and neglect was all part of the landlord's efforts to drive them out so he could raise the rent. A landlord group called the Rent Stabilization Association is currently suing the city to overturn the law, which they say is redundant and only "encourages people to make frivolous claims."

#bushwick
#cats
#dead
#landlord
#lawsuit
#tenant protection act
Do you know the scoop? Comment below or Send us a Tip