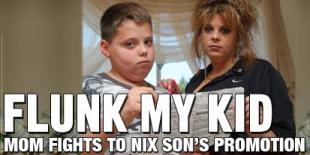 The Post updates the story about the kid whose mom wants him held back a year! Anthony Hassell's father Victor Raimo called Post reporter Chuck Bennett to complain about his estranged wife's tactics discussing their son's 60.53 seventh grade average.

Raimo said, "A normal mother doesn't do this, especially when she is a dropout of her own. My son shouldn't be embarrassed - it should be her." But the kicker is that Raimo called from Manhattan House of Detention, where he's "serving a six-month sentence for not paying child support." !!!

Deanna Hassell had argued that Anthony's grade should require him to repeat the seventh grade, but since his standardized tests scores were above the cut-off, so Staten Island's IS 51 promoted him to the eighth grade. And this is in spite of Anthony missing almost a third of the school year. From the Post:

"He missed 55 days of school. How did that happen?" asked Raimo, who acknowledged he only sees his son two or three times a year. "Why is she not being a mother?"

He further blasted his estranged wife's very public plea to flunk their son, calling it "despicable" and charging that she "humiliated" their son just to get publicity for herself.

Oy - this sounds like this is headed to Jerry Springer. Maybe a reader's comment from Monday sums it up: "Sadly, the boy is probably least to blame and has the most to lose." Also - we hear the Raimo is eager to hear from New Yorkers - his address at MDC is after the jump.

Hassell does have her supporters: Teachers union head Randi Weingarten said that the situation is indicative of the problems relying on school tests and Curtis Sliwa thinks Anthony should be flunked. In fact, Sliwa's comments have some Staten Island residents upset (he said something along the lines of, "Well, what do you expect, look where they come from"), but Sliwa told the Advance, "This kid doesn't understand that [being flunked would be a good lesson]; he's laughing all the way up to the next grade. If Staten Island wants to take offense at that, well, listen, what I've said about Staten Island is that it has been a sanctuary for organized crime. But the same is true in Brooklyn, Queens and the Bronx."