Bad Seeds in the Big Apple 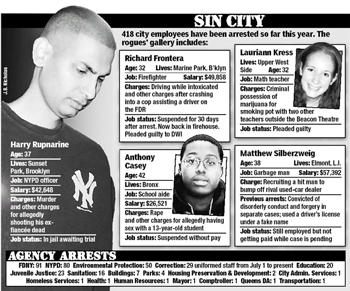 Given the large number of people that work for the City of New York, it's inevitable that some will be charged with crimes in any given year. The New York Post, however, is highlighting some of the more noteworthy crimes committed by city workers in today's paper. They range from the relatively benign (a schoolteacher getting busted for smoking weed before heading into a show at the Beacon Theater) to the more serious (a drunk driver who hit a fireman assisting a driver, and a man who murdered his ex-fianceé.)

One of the arrested City employees fingered in the Post's story is Anthony Vasquez. Vasquez is an NYPD officer who was arrested last month for ramming another car in the Bronx and threatening its driver with his gun. He's been charged in the past with shooting a neighbor's dog, pulling his gun in a bar, and allegedly threatening his common-law wife. New Yorkers with long memories might remember Vasquez as the cop who shot Patrick Dorismond, a Hatian immigrant.

While not as well-remembered as the killing by police of Amadou Diallo or the assault of Abner Louima, the death of Patrick Dorismond was a flash point in NYC politics during 2000. Dorismond was an unarmed security guard that Vasquez shot to death while on duty. Quick to back the NYPD following the man's death , Rudy Giuliani blurted out at a press conference that Dorismond had a record and convictions as a juvenile––information that was legally sealed––and critics said that the Mayor was guilty of a smear-job on a man who was murdered by the police. Some credit Giuliani's knee-jerk defense of the NYPD in Vasquez's shooting, more than his bout with prostate cancer, with 86'ing his hope of a successful run at a Senate seat versus Hillary Clinton.