Bad Parents of the Year 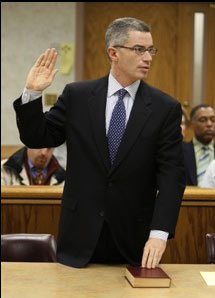 Former New Jersey Governor Jim McGreevey and his ex-wife Dina Matos McGreevey are making sure they're not letting the best interests of their six-year-old daughter get in the way of their bitter divorce. The publicly feuding pair were back in court yesterday, where they were excoriated by a judge. The McGreeveys split when the governor resigned amidst a sex harassment scandal in which he famously announced that he was "a gay-American."

"The hatred you have for each other overrides everything, including the love that you have for your child," Union County Superior Court Judge Karen Cassidy told them.

"This birthday party is about the saddest thing I have seen ... I feel like I'm the only one protecting her."

The latest dispute been Jim and Dina was their daughter's birthday party, for which Jim hired clowns and ponies, although it was not his weekend to have custody. The party's scheduled for tomorrow and instead of hashing things out privately, the parents headed to court to plan logistics.

When schedules clashed, former Gov. McGreevey hired clowns, face painters, and ponies rather than work things out with his wife. This led to the court clash, after Dina Matos McGreevey objected to his pre-emptive party planning. McGreevey was fined by the judge for his wife's legal costs in the latest episode, because he failed to attempt to coordinate with the family's parental facilitator.