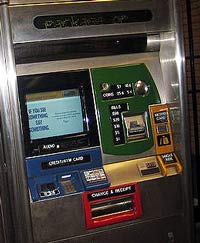 A trio of grifters allegedly bilked the MTA out of $800,000 over the past three years by exploiting a software glitch in a single MetroCard machine in Penn Station. According to the Post, police have arrested a Roosevelt, Long Island resident named Cary Grant (ha), his wife Lisa Foster Jordan, and their friend Christopher Clemente, a former student at the University of Pennsylvania's Wharton School whose scholastic career ended in 1990 when he was convicted for heroin and weapons possession.

Clemente's father, Henry, tells the Post, "It's not like him to be involved in something like this." Clemente had seven MetroCards in his wallet when police took him into custody last week. MTA officials say Jordan was the one who first discovered the "magic" MetroCard machine, which enabled customers to get free MetroCards and Long Island railroad tickets if they used a debit card from a non-local bank with insufficient funds in the account. Officials swear that the odds of Jordan stumbling upon the error were "astronomical," and the scam was only discovered after a routine agency audit... a few years after the first free card was dispensed.

In the meantime, Jordan and Grant allegedly enlisted Clemente to help them sell the cards to commuters on the LIRR and New York subway system. The Post reports that cops who were staking out the machine last May caught Jordan with a list of customer orders; Grant and Clemente weren't picked up until last week. All three were charged with grand larceny and criminal possession of stolen property, and the Penn Station MetroCard machine joins a growing family of malfunctioning subway machines.