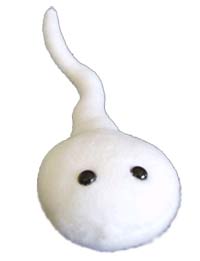 If you're going to donate sperm to someone as a favor, talk it over with your lawyer first! Newsday reports a Nassau County doctor who donated sperm to a co-worker over 18 years ago is "legaly considered the father and may have to pay child support for the college-bound teenager."

The doctor says he donated the sperm to his co-worker and her partner; he had agreed to give up rights and benefits to the child, but allowed to have his name on the birth certificate as the father, saying it was in the child's" best interests that he would have an identity when he grew older." The doctor, who remained anonymous, even gave the boy gifts, spoke to him a few times, and signed card "Dad" or "Daddy," prompting the mother's lawyer to say, "It's still a parental relationship."

The doctor was trying to demand a paternity test, which the mother was willing to do, but a judge barred that, saying there could be a "traumatic effect" on the 18-year-old. A reproductive lawyer suggests that men interested in donating sperm to people they know should research the issues related. The doctor's lawyer said, "Eighteen years later, you end up dealing with something that you didn't know you were going to deal with. Sometimes people aren't really thinking about the legal ramifications."

Next, a court will decide whether the doctor should pay child support. City Journal had an interesting article about the cultural and legal ramifications of artificial insemination. Here's a sample contract for between known sperm donors and recipients.