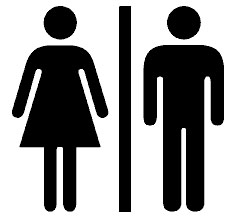 Of all the days and in all the neighborhoods for this to happen: On Sunday, the Daily News reports that Khadijah Farmer, a "masculine lesbian," was kicked out of the women's bathroom at the Caliente Cab Co. on Seventh Avenue in the West Village. And this happened to be a few hours after the Gay Pride Parade!

Farmer says that when she went into the ladies' room, another woman gave her a look and said, "This is the women's bathroom."

"I replied, 'I know that. Thank you. This is where I'm supposed to be,'" Farmer said, noting that she was wearing a yellow polo shirt, blue jeans and sneakers.

Moments later, a bouncer burst into the ladies room and began banging on her stall and yelling at her to leave, she said.

The bouncer refused to believe that Farmer was a woman even after she emerged from the stall and attempted to show him her driver's license, she said.

"He totally dismissed that," she said, adding that the bouncer told her "he wanted me out of his bathroom and restaurant."

The restaurant declined to comment, but the Transgender Legal Defense & Education Fund wants the Caliente Cab Co. to compensate her for violating her civil rights.

And a Brooklyn bar has been under fire over allegations a bouncer beat up a gay patron.