2014 was the hottest year on record across the globe. It joins 2010 and 2005 as one of the three warmest years recorded. The ten hottest years in recorded history have all occurred since 1997. We as a species are in deep trouble, and there's only so much time left until our own inaction annihilates us, but hey, that plastic bag tax sure will do a number on old people!

Both NASA and the National Oceanic and Atmospheric Administration (NOAA) have confirmed 2014's record global heat, noting an average global temperature that ticked 1.24 degrees Fahrenheit above the average set in the 20th century. The past year was the hottest since scientists started keeping track in 1880. And though some of the eastern United States experienced unusually cool temperatures last year, the western United States and Alaska experienced unprecedented extreme heat, as did a number of countries in Europe, including the United Kingdom. And most chillingly, the ocean's overall surface temperature was the hottest its ever been in recorded history.

All this occurred without the presence of El Nino, a weather phenomenon usually responsible for warmer temperatures worldwide. The evidence, scientists say, is obvious. "If you’ve got a long term warming trend, you’re going to get new records every so often—in fact, on a pretty regular basis," NASA researcher Gavin Schmidt told the Washington Post. "This is what you’re expecting, and this is going to continue to happen because the underlying rate of global warming really hasn’t changed."

If you remain unconvinced you are a fucking imbecile whose grandchildren will curse your name, but here are some climate anomalies NOAA spotted in 2014: 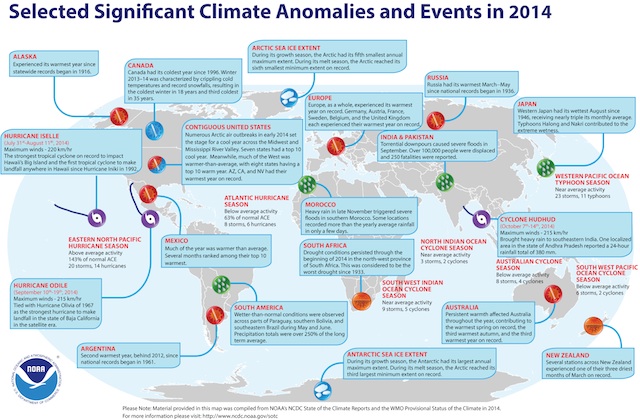 And here's a summary of climate anomalies from last December alone, where the United States experience its second warmest December ever: 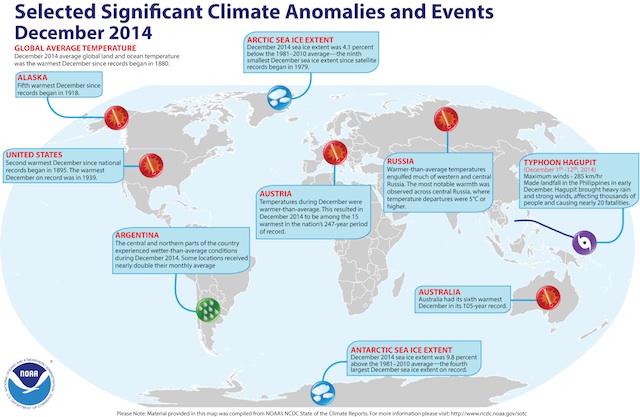 Despite some very small progress made at last year's United Nations Climate Change Summit, world leaders continue to fail enact significant legislation that would slow down this disastrous warming of the Earth. And though our doomed civilization has made some attempt at protest, there's only so much time left to turn this planet around. Plus we also have to finish Netflix-binging the entire Friends series...

#climate change
#global warming
#nasa
#noaa
Do you know the scoop? Comment below or Send us a Tip