The infant who was delivered prematurely after his parents were killed in a Williamsburg hit-and-run has died, according to Orthodox community leader Isaac Abraham. The child had been listed in stable condition after being delivered in the wake of the crash that killed parents Nathan and Raizy Glauber, both 21. But Abraham now says the child has died. Regarding the driver who fled the horrific scene, Abraham tells the Times, "This guy's a coward and he should pay his price."

Raizy Glauber, seven months pregnant, was not feeling well on Saturday and was being taken to the hospital by a livery cab driver shortly after midnight when the cab was struck by a grey 2010 BMW at the intersection of Kent Avenue and Wilson Street. The Times reports that "the engine of the livery car ended up in the backseat, where Raizy Glauber, who was seven months pregnant, was sitting before she was ejected, Abraham said. Her body landed under a parked tractor-trailer, said witnesses who raced to the scene after the crash. Nachman Glauber was pinned in the car, and emergency workers had to cut off the roof to get him out." 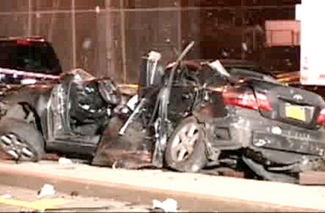 The baby was delivered by cesarean section and weighed just four pounds. The livery cab driver was treated for minor injuries and released, while the driver of the BMW and an unidentified passenger both fled the scene on foot. It's unclear if Nunez came to a full stop at the intersection before turning onto Kent, a main thoroughfare without many stop lights. "I don't remember anything," the cab driver, Pedro Nunez, tells the Daily News. Takia Walk, the registered owner of the BMW, who was not in the car, was arrested yesterday and charged with insurance fraud, the Times reports.

"God is punishing me for my sins by taking away my daughter,” Raizy Glauber’s father, Yitzchak Silberstein, said in Yiddish at the couple’s funeral Sunday afternoon, according to the News. "Nobody knows how this could happen." Abraham says the newborn’s body will be named, circumcised and buried with the parents.

#baby
#brooklyn
#car crash
#hit and run
#nathan glauber
#orthodox
#raizi glauber
#williamsburg
Do you know the scoop? Comment below or Send us a Tip