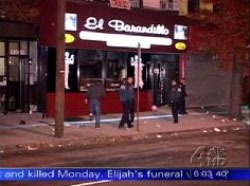 A happy event turned violent early Sunday morning when the manager of a Brooklyn catering hall fired at three guests, and by the time the police caught a second shooter, one person was dead and four others were wounded.

A baby shower at the El Barandillo banquet hall on Atlantic Avenue turned into a fight between members of the Bloods and Crips - all of whom were invited to the shower. El Barandillo manager Omar Marquez tried to stop the fight by having everyone leave and decided to fire a gun into the air to get everyone's attention. The Post reports that "A few of the angry guests shoved him through the door and locked him out," only for Marquez to return and shoot three guests, killing one of them.

The police arrived in time to see another guest shoot at Marquez six times, hitting him twice. They chased the shooter, who was fleeing with a friend, and ended up shooting the suspect, Wallace Davis, in the leg. The friend, Emmanuel Hicklinson, picked up Davis' gun and helped Davis run further, but the cops caught up with Davis. The police also fired at Hicklinson, who threw the gun over a fence shortly before police caught up with him. Davis and Hicklinson, who have criminal histories, were arrested.

Marquez is in critical but stable condition, while shower guest Darren Francis, whose head was grazed by one of Marquez's bullets, is in stable condition. Another shower guest, Jason Garcia, was hit in the chest and is at a hospital; it's unclear what kind of condition he is in.