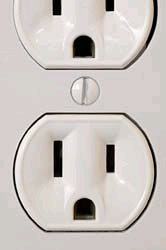 A family is mourning the death of a 7-month-old boy who died during an electrical fire on East 3rd Street yesterday morning. The Fire Department believes that the fire was caused by a "faulty timer that was rigged to an air conditioner in the baby's third-floor room."

The Daily News explains that the family, the Goldmans, are Orthodox Jews who were observing Succoth. They had recently purchased a an electrical timer for the baby's AC unit, because they would not be able to touch electrical appliances during the holiday. But the timer was "not meant to be used with such a powerful appliance and was quickly overloaded." Additionally, the house did not have working smoke detectors. Firefighters broke through the roof of the house to reach the baby's room, but were unable to save him.

The child's mother Raysa Goldman tried to reach the baby's third-floor bedroom, but there was too much smoke. She did manage to save five other children. The family will have to wait for Succoth to end before they can mourn or bury the baby.

Last week, 12-year-old boy, his aunt and grandmother were killed in a fire, caused by faulty wiring, in Flatbush; the boy died while trying to save others. Here is the FDNY's safety website.

#baby
#children
#daily news
#death
#fdny
#fire
#fire department
#holiday
#news
#News: NYC
#orthodox jews
#safety
#the daily news
#the fire
#The Fire Department
Do you know the scoop? Comment below or Send us a Tip
A new Gothamist is coming! We’ve moved comments over to our beta site. Click here to join the conversation and get a preview of our new website.