Two Port Authority officers helped deliver a baby in the Holland Tunnel this morning, according to a spokesman for the PA. Soukaina Nekhlaoui was being driven from her home in New Jersey to Lutheran Medical Center in Brooklyn when the impatient kid started coming out sooner than anticipated. The child's father, Abdel Elkarhat, was behind the wheel; according to the Associated Press he pulled over at the mouth of the tunnel on the Manhattan side and screamed for help.

“The father was really frantic,” PA senior tunnel and bridge officer George McCann, 52, tells the Daily News. "You could tell he was a new father. He was running around screaming, ‘Help me! Help me!’ ” The baby, which was six weeks premature, was already crowning when McCann and his partner Jean Bernard got to it. They helped guide it out and then used a blanket to create a makeshift oxygen tent to protect the baby from car exhaust fumes.

An EMS crew arrived shortly afterward to cut the umbilical cord, and mother and child were taken to New York Downtown Hospital, where they're both in stable condition. They've named the child Nassim, meaning “scent of a morning flower,” which we suppose is better than "scent of the Holland Tunnel." 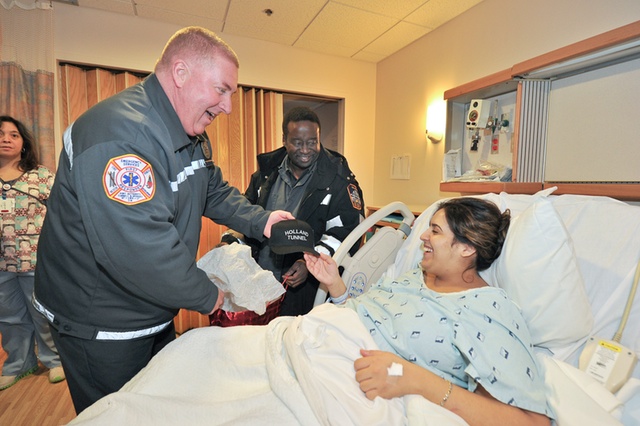