The NYC employees of Babeland, a sex toy shop where workers double as pleasure, sexual health, and product experts, have joined one of the largest retail unions in the country in a push to advocate for needs unique to their work environment—transgender rights, as well as adequate training and support to deal with difficult customers.

Babeland employees across the store's three NYC locations—in SoHo and Park Slope, and on the Lower East Side—voted 21 to 4 to join the Retail, Wholesale and Department Store Union on Friday, as first reported by the New York Times.

"This is the only adult sex shop that is organized," said RWDSU President Stuart Appelbaum in a statement. The store was founded in Seattle in the late 1990s, though West Cost workers were not part of last week's union vote.

Katherine Wolf, 25, has been working at Babeland in Park Slope since November (Wolf uses the gender pronouns they/them) and says that for them, job security is paramount.

"There has been fear of losing our jobs because of... speaking up, or confronting some of the problems in the workplace," they told us on Tuesday. "For me one of the things I find most challenging is difficult customer interactions, and feeling like I have to sacrifice my own safety or boundaries in order to accommodate customers who are making sexual advances and saying inappropriate things." 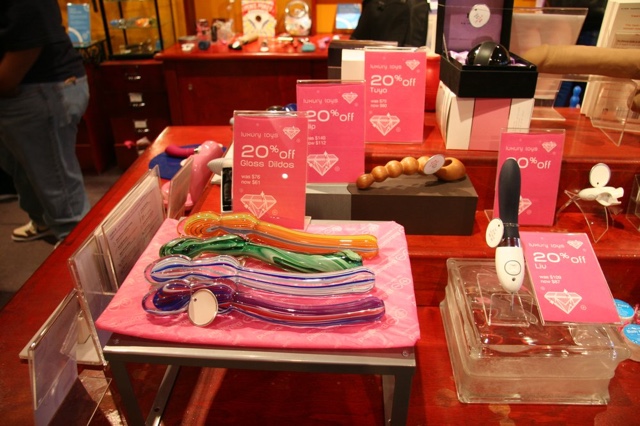 Some Babeland employees told the NY Times they also hope the union will advocate for management to respect preferred names and gender pronouns—for example, one NYC employee, Massima Desire, said she balks at her legal name in the clock-in machine.

The union is also going to advocate for more comprehensive training on how to deal with customers whose questions and comments might verge on harassment: an issue that's more common at a sex shop than, say, Old Navy. The NY Times reports that employees have been advocating for caller ID at all of their NYC locations in order to avoid repeat callers who threaten them over the phone. (Two of the three NYC stores now have the technology.) The store has also reportedly come up with a new list of training points to help workers feel safer on the job.

Babeland co-founder Claire Cavanah told the paper that she was surprised to learn that the workers were unionizing, pointing out that the starting wage for NYC employees recently bumped from $12 to $14. As for concerns about employee safety, she said, "For a year we have been working on this very issue, making Babeland a better pace to work."

"[$14] certainly isn't a living wage in New York," Wolf said Tuesday. "I think we want to work with management to figure out a wage that is reflective of the real cost of living. A lot of my coworkers love working here, and have second jobs, third jobs."

Wolf added that they're hoping the union momentum will empower Babeland workers to organize outside the context of work.

"I think there's a really cool potential to... support the de-criminalization of sex work in general, which is something I feel really strongly about," they said. "One of the amazing things about this process is how empowered and unified we feel right now. As a group of young folk, I'd love to see us use our voice to support other people. What other places can we have an impact?"

#Babeland
#retail
#transgender rights
#unions
#Wholesale and Department Store union
Do you know the scoop? Comment below or Send us a Tip