As far as I can tell, kittens are made of rubber and springs, an anatomical construction that allows these tiny floofs to work their way into adorably alarming places. They wedge themselves inside car engines, get lost inside potato chip bags strewn on subway tracks, become trapped inside State Capitol walls, and sometimes, strand themselves on the Bayonne Bridge between Staten Island and New Jersey. That's where a Port Authority policeman found and rescued a disoriented five-week-old kitten on Wednesday.

The NY Daily News reports that construction workers alerted officer Ninzio DelPriore to the sounds of disembodied mewling around 11 a.m. DelPriore traced the teeny meows back to their source, discovering a little catface had squeezed herself between cement barriers and could not get out without the officer's help. 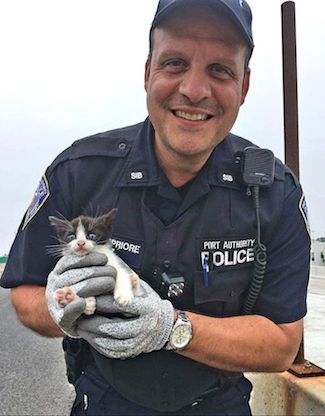 "The kitten was definitely stuck, it could not move, it was meowing," Bobbie Egbert, Public Information Officer for the Port Authority Police Benevolent Association, told Gothamist. Luckily, though, DelPriore was able to free the kitten from its concrete prison. After the ordeal, the kitty looked frazzled, but was physically unharmed.

Once he got the kitten out, DelPriore had to figure out what to do with her. According to Egbert, he drove with the cat on his lap, first to find a box, and then to a Staten Island ASPCA facility. They couldn't take the smallface, so he brought it to a nearby vet. Although the veterinarian "graciously examined the cat, determined it was a female, and that it was in decent health," Egbert explained, ultimately, "They could not take the kitten in, either."

So DelPriore transported his furry charge back over the bridge, depositing it with the Perth Amboy Animal Shelter in New Jersey. Newly named Bridgette—get it?!?! Of course you do.—she will be available for adoption from once she reaches five pounds.

"From time to time, animals do find their way onto that particular bridge," Egbert said. "It's a miracle the cat was not killed because it's a very busy bridge. The head of this thing is only as big as [DelPriore's] thumb." Let's go in for a closer look: 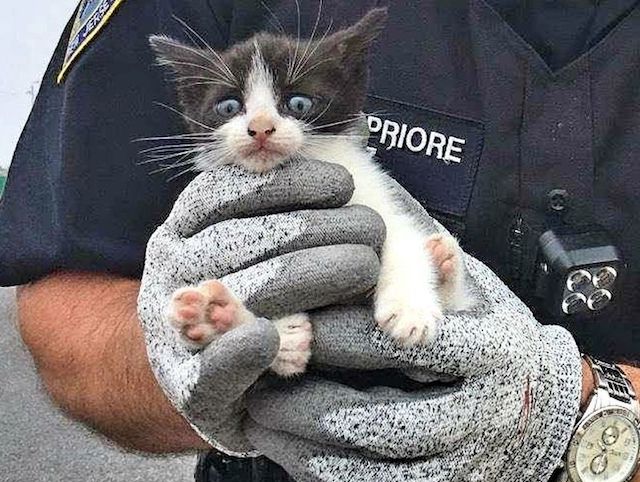 #kitten
#kitten rescue
#mew
#staten island
Do you know the scoop? Comment below or Send us a Tip