As the old saying goes, you ain't a real New Yorker until [horrifying experience that would make any sane person question why they pay absurd amounts of money to live here]. On Friday (the 13th, naturally), Bari Finkel got to fill in her bracket when a rat baby pushed itself through the drain of her bathroom sink, scampered around leaving trails of sludge, and then reunited with its mom... you know, back down in the drain pipe, where she had presumably just birthed an army of rat babies.

That last part, where the rat baby squeezes itself back into the darkness of the drain, is probably the most visually disturbing part of this New York story. Will you... be coming back? With your fam? 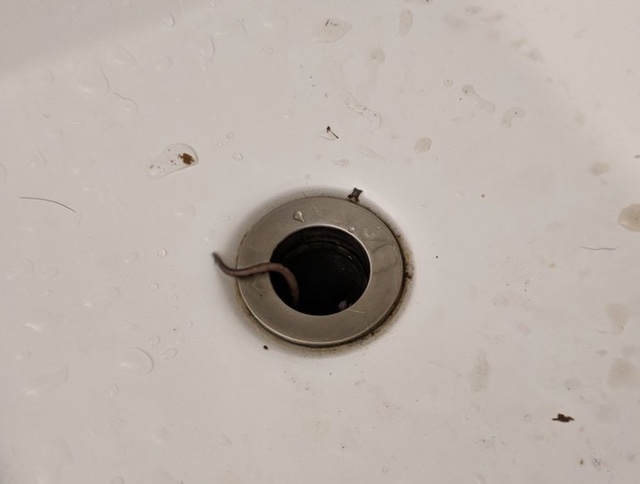 Finkel, who lives on the ground floor of a brownstone in Bed-Stuy, told Gothamist this morning that her boyfriend had been in the bathroom when the nightmare unfolded. "He happened to be looking at the sink at the same moment that the rat came up," she recalled. "I heard him yell and thought he was hurt until he told me to come to the bathroom... that's when I saw the baby rat emerging from the drain."

Hi a rat baby just came out of our sink?? New York you're a literal nightmare? pic.twitter.com/cYJKLx965M

"It was trying to crawl out of our sink," Finkel explained. "My boyfriend grabbed a plastic bag to coerce it in there. I decided to take a couple pictures since this was so unbelievable. It escaped back down the drain when we lifted the bag for pics."

Prior to this, Finkel said they haven't had any rodent problems in the building. She added, "Coincidentally our landlord was coming by the next day anyway, so we told him... He was pretty shocked! It seems like there's nothing really to do about it, so we all just had a good laugh."

Ah, but there is something we can and should all do. Unlike toilet rats, sink rats can be stopped by rat gates on the drains, which come in a variety of designs—just make sure your sink drain isn't left wide open.

Of course, the bad news is, all that plumbing is connected, so a blocked sink rat is really just a future toilet rat. You know what, just keep the lid down and keep telling yourself New York City is the greatest place on earth.

Our sink drains super slow with our cover but we immediately put that rat gate back in. Lesson learned? 😱 pic.twitter.com/9A3UPIfRtF

#rat baby
#rats
#rodents
#original
Do you know the scoop? Comment below or Send us a Tip
A new Gothamist is coming! We’ve moved comments over to our beta site. Click here to join the conversation and get a preview of our new website.